A movie for Kamen Rider Gaim

. In the film, Kouta is recruited by the mysterious Lapis and brought to an alternate reality where he comes face-to-face with his enemy Kohgane, an evil Armored Rider who claims to be the physical embodiment of the Golden Fruit himself.

The catchphrase for this film is "All Armored Riders move out! Who will claim the forbidden "Golden Fruit"!?" (全アーマードライダー出陣！ 禁断の“黄金の果実”を手に入れるのは誰だ!?, Zen āmādoraidā shutsujin! Kindan no "Ougon no Kajitsu" o te ni ireru no wa dareda!?)

Gaim is taken into a new version of Zawame, where soccer teams aim to win the All Rider Cup. The reward: The Golden Fruit. Along with the City restored and the immense soccer popularity, he sees many things different from his world, such as Hase and especially Yuya still alive in this world. Though questioning why this is happening, there is a secret about the world. A strange man named Kohgane starts sending locusts to other armored riders, consuming them, leaving their Lockseeds intact in order to revive his Golden Lockseed, which in turn transforms him into Armored Rider Mars. Along with a strange youth named Lapis who seems to be in relation of the new world, will the Beat Riders be able to stop him?

Gaim fights off a pack of Inves in the now Helheim flora-invaded Zawame City alone. There, he runs into a boy who asks him about soccer. Kouta, demonstrating the goal of Soccer and how it's a way of demonstrating your strength while allowing the losing side to improve and having the chance to also wins enlightens the boy. The boy then creates his own ideal world - a "dream" world that is a separate dimension from the original Zawame, focusing on the sport of Soccer.

As the boy teleports from place to place, Kouta is lured into a destroyed stadium. But upon further inspection, he hears chants of what appears to be a crowd and upon entering, he sees spectators everywhere. Kouta is informed of the situation from Mai about the All Rider Cup and Kouta changes into uniform. Defeating Team Baron, Team Gaim wins, moving one step closer to the All Rider Cup as well as what is rumored to be the power to grant any wish, the Golden Fruit. Peko, upset that Team Baron is lost is bitten by a dark grasshopper that landed on his back.

Kouta realizes that this world is not the Zawame he is familar with as Hase, Sid, Takatora, and Yuya are alive and well. He also realizes that the word Inves and Helheim are unknown meanings in this world. Kouta also runs into the young boy from earlier who reveals that his name is Lapis. However, when Kouta tries to ask more questions, Lapis disappears in thin air. Mitsuzane discovers that his brother is alive and has a wife, causing Mitsuzane to remember the discrepancies in front of him with memories of his time in the original world. This memory conflict causes him to go undercover to discover the truth.

At Team Baron's loft, Peko, who envied both Kaito and Zack, starts to ramble about wanting the Golden Fruit before transforming into Kurokage Shin with a Genesis Driver to attack Zack. Kaito intervenes, but Peko is mysteriously enveloped in what appears to be Helheim vines and is reduced to nothing. Kaito spotted Lapis watching and disappears. Elsewhere, a rusted Lockseed recovers its golden color.

Meanwhile at Charmant, Hase starts to attack Jonouchi, wanting more power and transforms into Kurokage attacking even Oren. However, the same Helheim vines envelops Hase and he too is reduced to nothing. Kouta, appearing at Charmant realizes that Lapis was watching from afar. Catching up to Lapis with Kaito and Zack, Zack blames Lapis for Peko's death and attacks Lapis, but is also enveloped in Helheim vines. Kaito calls out Lapis, but is unable to find him.

Elsewhere, Oren calls out one of the Armored Riders who he believes is behind the disappearances of his allies and rivals. At the Yggdrasill Corporation, Sid is attacked by Takatora, who realizes that the former has been plotting to betray him. The two fight on top of an elevator shaft with Zangetsu Shin knocking Sigurd off the platform with Sid being enveloped in Helheim vines. Mitsuzane finds a recording left by Ryoma Sengoku who had been attempting to experiment on an artifact that he found.

Oren and Jonouchi rallies around his private militia against Takatora and the Kurokage Troopers resulting in a battle that destroys Zawame City. Kaito also enters the battle and Gridon is killed by Zangetsu Shin. Bravo, Zangetsu Shin, and Baron all activate their Driver finishers with Takatora and Oren dying while Yoko Minato saves Kaito and throws his Banana Lockseed onto the ground to give the illusion to the culprit that Kaito had fallen. Lapis, watching from afar is confronted by Mitsuzane, however Sagara appears before them explaining what is happening and how Kouta is in danger.

Kouta, at the outskirts of where Zawame City was unaffected, is confronted by Yuya, who asks why Kouta isn't yearning for the Golden Fruit like the other Armored Riders. Mai follows Kouta, but Kouta stops Mai from going to Yuya's side by revealing that Yuya isn't really Yuya. Kouta reveals that he found it weird how he was Gaim in this world if Yuya was always the original intended user for Kouta's Sengoku Driver. Yuya stated that Kouta was the best choice. Kouta asks Yuya wh he has a Lockseed without a Driver. Yuya then says he needs it to protect himself from Inves. Kouta, now confirming his theory tells Mai that this man isn't Yuya. Yuya turns into Kohgane and calls himself the "God of the New Generation" using the Golden Ringo Lockseed to transform into Armored Rider Mars before attacking Kouta. Mai flees with Kouta and Kohgane fighting inside the destroyed Zawame. Kouta finds the Lockseeds of Takatora, Oren, Jonouchi, and Kaito, swapping between Banana Arms, Donguri Arms, and Durian Arms against Mars. However, Gaim gains the upper advantage on Kohgane with Jimber Lemon Arms causing Kohgane to use Yuya's appearance to lower Kouta's guard. Kouta is enveloped by the Helheim vines with Kohgane being angered that Kouta wasn't fully consumed.

Mai runs around the wreckage of the now destroyed Zawame to find Kouta. She becomes relieved when she sees him, but Mitsuzane tells Mai that Kouta has already fallen. Transforming into Ryugen against Gaim Yami, he is easily defeated. Mai notices Lapis and the two are confronted by Gaim Yami. However, Yoko Minato and Kaito appear to join the fight, but the two are easily defeated by both Kouta and Kohgane. Lapis reveals to Mai that his real name is Shamubishe and he is what they call an "Over Lord". Lapis enters Kouta's mind revealing to him that they're not so different, that they had the same goals while showing him his memories of Demushu, Redyue, and Rosyuo. Lapis reveals to Kouta that he's not in Zawame, but rather a world that he created that is like a dream - it's not connected to Zawame and that the Helheim threat is still real and active. Gaim breaks free of his brainwashing and confronts Mars telling him that "there is no real gold in you". Kohgane is overpowered by Gaim Kachidoki Arms and transports all of the Riders to a desolate wasteland.

Lapis, encouraged by Kouta's strength and his will to never give up, conjured a horse for him to use. Gaim transforms into Kiwami Arms. Mars and Gaim clash, with Gaim managing to defeat Mars in his Fire Horse form, reviving the Riders that he considered his allies (Sid and Ryoma were never considered his allies or friends). Lapis is then given a Silver Ringo Lockseed by Sagara and the remaining Armored Riders transform into their respective forms. Kohgane is then finally destroyed by a Rider Kick from Gaim.

Lapis expresses his gratitude towards Kouta and tells him he can finally “rest”, and then he disappears. Kouta suddenly finds himself right back where he started in the the half destroyed Zawame. He says goodbye to Lapis and promises to do whatever it takes to save his own world too. Deep in the Helheim forest, the wind blows to reveal Kamuro’s spear and Lapis’ bracelet, rusting, appearing as if they've been there for a long period of time. Along with those items, a soccer ball stays idle near them.

The film's placement of the TV series is set right after Kouta hears out Ryoma Sengoku's method of entering the Yggdrasill Tower through a back entrance. The present Kouta is transported to the Soccer World where Mitsuzane's tragic memory of defeating Takatora exists, allows him to partially realize that the current world he is in is fake. 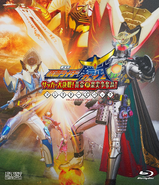 As of July 25, 2014, this movie and Ressha Sentai ToQger the Movie: Galaxy Line SOS