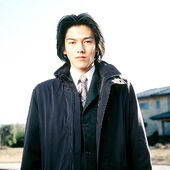 Takahiro Omuro
Add a photo to this gallery 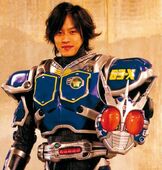 Urataros
Add a photo to this gallery

G3 Team
Add a photo to this gallery

In the novel reimagination of Kamen Rider Agito, the G3-System is originally created to fight the Lords/Unknown, not the Gurongi/Unidentified Life Form.

The Generation-3 System was developed by the Tokyo Metropolitan Police Department's Squad Against Unidentified Lifeforms division. SAUL had received funding from the city government to develop a reinforced exo-suit to combat the Gurongi, which were known to the police as Unindetified Lifeforms. Their design was based on Kuuga, who was thought to be the fourth Unidentified Lifeform to appear. However, because the Gurongi were eliminated before its completion, research on the project was postponed indefinitely. By this time, the data acquired from the first two phases of the project had been implemented into the Generation-3 System, which was entering its final phase of development and ready for deployment. With the emergence of the Lords, the police's G3 unit was commissioned to contend with the threat.

By the time of Kamen Rider Zi-O, the G3-System has been mass-produced, presumably using data from G3 Mild.

Despite using advanced technology, G3 is vastly outclassed by the Lords and those that possess a Seed of Agito, leading to it being overwhelmed in its first battles.

G3 is equipped with conventional ballistic weapons. His primary armament is the GM-01 Scorpion, which is holstered on his right hip. The Scorpion can be augmented with the GG-02 Salamander grenade launcher, which serves as G3's main method of destroying Lords. For close combat, he can equip the GS-03 Destroyer on his left arm. The Guardacceler, which is used to access the Guard Chaser or can function as a backup weapon, is stored on the left thigh.

The Generation-3 Extension is an upgrade to the G3-System developed by Sumiko Ozawa in order to address G3's failure to effectively combat Lords. G3-X offers a drastic improvement in combat ability, allowing it to fight on more even ground. However, its most notable addition is an on-board AI to assist the operator. However, the AI's implementation was revealed to be seriously flawed. The AI's calculations, though perfect, required precise coordination and synchronization with the suit's motor functions. If the operator could not coordinate with the AI, G3-X would act erratically by itself and damage the user's body in the process. To address this issue, a new control chip with a less advanced AI was installed to make the suit less demanding.

In addition to the standard GM-01 Scorpion, G3-X's main armament is the new GX-05 Kerberos, a powerful vulcan gun that allows for modular customization. It can be equipped with a scope or docked with the Scorpion and converted to a missile launcher. For close combat, G3-X replaces the Destroyer with the GK-06 Unicorn, an electromagnetic combat knife stored on the left arm.

An improvement over G3's model, it multiplies power from the back-mounted battery by 10 times when transmitting electricity across the body.

In accordance with G3-X's improved battery, the swing width of the Energy Volume power-increasing buttons on the sides has been increased. The rest is the same with the previous model.

A storage holster for the GM-01 Scorpion, which can also be used to recharge the weapon.

Compared with the type used by G3, the durability, heat resistance, moisturization and breathability has been increased due to the new type of steel strings embedded into the jacket.

A fixture located around the clavicle and neck sections that connects the Power Converter Lung with the Turtle Shell (see below). Within the Buckle lies various pipes for energy transmission.

Shoulder-mounted devices used to dissipate excess heat from the Power Converter Lung to the outside.

A backpack which mounts G3-X's battery unit. Below the battery mounting point lies a storage point for a pair of energy magazines used by the GX-05 Kerberos.

The same model used by G3, now with doubled energy capacity and one-third of the weight reduced.

An upgraded version of G3's G-Com with increased accessing speed and an updated OS.

Improved models of G3's PLSS with its servo motors having twice the strength of the original, covered by Hi-metal. It allows G3-X to run 100 meters in 8 seconds and jump up to 20 meters of height. The armor structure of the system has multiple similarities with the one used for the Power Chest for better protection, along with having various air-fit bags embedded.

Kamen Rider G3-X's mouth grill. It can be used to remove carbon monoxide from fires and supply oxygen to the wearer along with filtering out oxygen even when underwater. This equipment shares the same name with and is most likely a homage to Kamen Rider X's mouth grill, although unlike X's, it is not used in a transforming sequence.

Kamen Rider G3-X's eyes with increased sensitivity and durability to the cover lenses. Viewing range is tripled compared to G3's.

G3 Mild is a test unit for a mass-production model of the G3-System. It incorporates parts from both the standard G3-System and G3-X. However, funding was inadequate, causing the development of mass-produced G3 forces to stall. The suit is still in its early prototype stage, resulting in it being even weaker than the standard G3-System. The automatic fitting function from the G3-System was adapted so that anyone could equip it. To test this function, Takahiro was chosen to use the system.

During the planning of G3-X's design by PLEX, he was originally going to be equipped with a riot shield. For some unexplained reason, this idea was scrapped from the final design. This concept, while never used in the series, would be featured on the dust jacket of the book Kamen Rider Art Collection Hero Hen.

Retrieved from "https://kamenrider.fandom.com/wiki/Kamen_Rider_G3?oldid=642080"
Community content is available under CC-BY-SA unless otherwise noted.