A movie for Kamen Rider Ex-Aid

. The film takes place after the events of the series, where the Doctor Riders fight against a malicious gaming company who wishes to digitize all of humanity. The film's epilogue features an "early-bird" appearance from Kamen Rider Build ahead of his in-series debut, which leads into the events of their Movie War film.

To promote the film, a special companion movie was made available exclusively for the PlayStation VR on July 14, 2017.[1][2].

The catchphrases for the movie are "The End of Doctor Battle" (ドクターバトル終焉, Dokutā Batoru Shūen) and "Is it the world of VR (Virtual Reality) that saves their lives? Or real medical treatment?" (命を救うのはVR《仮想現実》の世界か－リアルな医療か－, Inochi wo Sukuu no wa Bui Āru (Kasō Genjitsu) no Sekai ka - Riaru na Iryō ka -.).

An evil ninja Rider named Fuma appears from the virtual reality world in an effort to conquer Earth! It is up to the CR Riders to use the power of virtual reality gaming to save the day!

Set after end of the Kamen Rider Chronicle crisis, a new outbreak of the Bugster virus occurs one rainy day. A group of Ninja Gamers began attacking civilians by projecting glowing shuriken, creating symptoms of game illness. At Machina Vision, the game company's CEO Johnny Makishima is pleased when a mysterious figure named Kagenari Nagumo reports the progress of the epidemic. He inquires about Nagumo's choice for a "Player", an ill girl named Madoka Hoshi. Nagumo tells him that she will be the perfect choice for their experiment.

At Seito University Hospital, Emu and Asuna are checking up on Madoka Hoshi. The girl is sad that she is stuck in the hospital as she wants to back at school with her friends and run in an athletic meet. Emu reassures Madoka to recieve her treatments so she could return back to her normal life. Emu confirms with Asuna that Madoka will be alright, but her unique condition could makes things a little more complicated. Suddenly, a pair of Ninja Gamers led by Kamen Rider Fuma attack the hospital, forcing Ex-Aid, Poppy, and Brave to fight them. Outside, Snipe would also confront a trio of Ninja Gamers as well before engaging them. While Ex-Aid tries to battle things out, Fuma and the Ninja Gamers would succeed in infecting Hiiro, Asuna, Taiga, Nico, Madoka and her mother.

Asuna, under her Poppy persona, wakes up outside a school track during an athletics meet. She discovers Taiga is the coach, Nico is the referee, and Hiiro has become Madoka's father figure. Poppy notices whenever Madoka is happy, a Gashatrophy appears above her head. It is revealed that all of them are comatose in the CR and trapped in some strange collective dream. Emu is struggling to deal with the large influx of patients as a large portion of the hospital staff have rendered comatose. Emu scans one of the patients with the Game Scope, but it reveals that while this outbreak matches game illness, there is no Bugster data to determine the cause.

Kuroto Dan and Kiriya Kujo investigate the case of the Ninja Gamers. While they initally look into Genm Corp., they learned from Tsukuru Koboshi that the company had been hacked, resulting in the Gamer Driver schematics being stolen along with the company's Rider Gashat development data. Kiriya suspects that all of the people in a coma are probably trapped consciously in the Game World. At Machina Vision, Kiriya meets up with Johnny Makishima to question his intentions. Nagumo would then infect Kiriya and Makishima with Hurricane Ninja's virus.

In Genm Corp.'s basement, Kuroto has developed Genm VR as a way for Emu to enter the Game World that the patients are trapped in. He also gives Emu a new Rider Gashat to access Mighty Creator VRX, a game that can create games from the user's imagination. While Emu enters the Game World, Kuroto helps distract the oncoming Ninja Gamers in pursuit, along with Parado's assistance. The Ninja Players succeed in killing Genm, leaving Kuroto down to his last life.

Upon entering the Game World, Emu meets up with Kiriya and learns Nagumo had created the Game World for his daughter intended to be a paradise. Confronting Kamen Rider Fuma again, Nagumo is infuriated that Ex-Aid is interfering in his "eternity", but Emu thinks that this is no paradise as people are suffering in the real world and it is his job to save them. He transforms into Ex-Aid Creator Gamer and using the Gashat's power of creativity to conjure up weapons and shields against Fuma. Ex-Aid creates a massive portal to send everyone back to the real world, except Madoka. While he tries to reach her, Madoka refuses to leave which forces Ex-Aid into the portal. The comatose Kamen Riders and the rest of Fuma's victims wake up in the real world. Meanwhile, Johnny Makishima meets with Madoka in the blank virtual space, congratulating her actions as he emerges as the ultimate "last boss".

As the Kamen Riders confront Nagumo, he laments that he wanted to make his daughter happy and give her eternal life in a virtual world. Emu called out Nagumo for giving up on her when she needed him most and as long as there is hope for the future, there is always a chance for a better tomorrow. Johnny Makishima arrives and congratulates Nagumo for his work. Makishima proclaims that he will end the world as its god, transforming into a red and gold variant of Gamedeus. The Kamen Riders battle Gamedeus Machina, much to no avail that knocks Emu, Taiga, Hiiro, and Kiriya out of their transformations. Gamedeus attempts to kill them all with a blast of flames, but Kuroto and Parado block the attack and seemingly destroy them. Gamedeus Machina spares the remaining Riders before leaving, viewing them no longer as a threat.

While the heroes mourn Kuroto and Parado's demise, Director Kagami arrives to urgently warn them about Madoka's condition. Her vitals are dropping rapidly as she is still comatose. If they don't operate on her condition immediately, doing nothing would cost her life. Hiiro wastes no time to perform the operation, with Emu and Asuna volunteering to assist making Madoka smile again. Taiga asks Nico to go be with Madoka, as he is planning on dealing with Gamedeus Machina by himself. Nico tells him to be careful as Kiriya follows him. At Machina Vision, Nagumo seems hesitant to go to the final phase of Johnny Makishima's scheme but thinks that there is nothing in the real world Madoka will miss.

Taiga and Kiriya approach Machina Vision where they confront Nagumo, who transforms into Kamen Rider Fuma. He faces off against Snipe and Lazer as they call out Nagumo for worsening his daughter's condition. Nagumo is outraged, wondering why they would do such a thing as operate on her. Madoka's condition worsens as her body begins to fade from the game illness. In this state, Hiiro cannot operate any further without risking her life. Emu and Asuna realize that Madoka wanted to stay in the Game World to make her father happy. Emu uses the Proto Mighty Action X Origin Gashat to neutralize her Bugster virus symptoms such that Hiiro can operate on her again.

After Snipe and Lazer defeat Fuma, they are blown aback by Gamedeus Machina. With their Rider Gauges almost reaching zero, Brave arrives and uses Taddle Legacy to heal comrades back to full health. While the three Riders battle Gamedeus, Emu arrives and talks with Nagumo about Madoka. While her operation was a success, she is still comatose refusing to leave the virtual world. Emu convinces Nagumo that despite her not knowing her father, he should at least be by her bedside to support his daughter. Lazer arrives in the bike form to offer to take Nagumo to see his daughter, which Nagumo accepts.

After Hiiro and Taiga were blasted away by Gamedeus Machina's attack, the latter ejects Parado and Kuroto from his body, revealing the two were alive as Gamedeus was using their Bugster data to speed up his recovery. Gamedeus Machina transforms into a giant Bugster and creates a large, expanding Game Area, forcing Emu to transform into Ex-Aid Muteki Gamer to engage him. Nagumo arrives at the hospital by his daughter's bedside, promising to never leave her side. Madoka would finally wake up and revealed that she knew from the moment she saw Nagumo that he was her "father". Despite Gamedeus Machina gaining the massive advantage, Ex-Aid Muteki Gamer manages to overcome the giant Buster. Ex-Aid responds to Gamedeus that the will and desire to live in the one powerful trait all humans share, a power so strong that it can change fate. With a supercharged Hyper Critical Sparking Rider Kick, Ex-Aid vanquishes Gamedeus Machina for good and the game is cleared.

Quite some time later, Nagumo and Akemi are checking up on Madoka at the hospital. Nagumo reassures his daughter that while she needs frequent check-ups with the doctor about her condition, there is hope for her. Madoka promises to be good and listen to her doctors if they could all go to a real athletic meet this time. Emu peers into the room to see Madoka smiling, happy that he could help another patient. Asuna and Hiiro visit him and the latter even smiles a little, being proud of Emu for saving Madoka and the other patients.

As the credits roll, time skips to one year later. Kiriya and Asuna are researching and distributing Bugster Vaccines to patients, while Kuroto madly laughs in his back in his arcade cabinet prison as he created an unbeatable game. In Taiga's clinic, Nico is relaxing and Taiga complains about the "embarrassing" pink poster she made. Hiiro is overseeing the training of new surgeons at the hospital, using the Genm VR system to simulate a surgical operation. Director Kagami sends Hiiro to help a patient under the wishes of the Ministry of Health, while expressing how proud he is of his son. Outside, Emu is teaching kids how to play video games. While he is scolded by his supervisor for fooling around, Emu recieves an emergency call of a game illness report. Emu races off to the location of a Bugster infection.

Exmu fights the Bugsters with Parado as Ex-Aid Double Action Gamer Level XX, wondering why there are so many of them. Suddenly, a strange red and blue Kamen Rider, who swiftly defeats the Bugsters. The red and blue Kamen Rider attempts to steal Ex-Aid's powers with some kind of container. While Parado tries to interfere, he is knocked aside when the red and blue Rider assumes GorillaMond Form. Emu loses his powers and questions who this person was. The red and blue Rider introduces himself to be "Kamen Rider Build" and takes his leave, presuming that they will see each other again someday. The film ends as the screen glitched in a black backdrop with a question caption: The Game Never Ends? 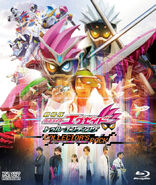