Kamen Rider Eternal (仮面ライダーエターナル, Kamen Raidā Etānaru) may refer to any of the following characters.

Red Flare (レッドフレア, Reddo Furea) is Eternal's weaker/incomplete form in the V-cinema Kamen Rider W Returns of Kamen Rider Eternal. This form of Eternal was accessed by Jun Kazu using the standard Eternal Memory, but due to incompatibility with the memory, he could only access the Red Flare form. Unlike it's Blue Flare counterpart, it lacks the extra Memory Slots, and Eternal Robe, and the flame designs on the arms and leg bands are red instead of blue, true to this form's name.

Through the Lost Driver and the T2 Eternal Memory, Katsumi transforms into Kamen Rider Eternal. Eternal's Maximum Drive with the Eternal Edge is the Eternal Requiem (エターナルレクイエム, Etānaru Rekuiemu), a power wave that cancels out all other Gaia Memories. Like most Riders in Kamen Rider W, Eternal has an English letter motif, in this case the letter E.

Eternal is also adorned with a black Eternal Robe (エターナルローブ, Etānaru Rōbu) cape after transformation. His catchphrase is "Now, enjoy your Hell" (さあ、地獄を楽しみな, Sā, jigoku wo tanoshimina) which is a more brutal counterpart to Double's catchphrase. Eternal's mask slightly resembles a horned owl and an infinity symbol. His primary Motifs are the letter E and a military commando.

By filling all 26 of his Memory Slots through the T2 Zone Memory, Eternal enters his Strengthening Armament (強化武装, Kyōka Busō) mode.

In this mode, he is able to absorb the X-Bicker's energy to produce the Eternal Wave to execute the Never Ending Hell (ネバーエンディングヘル, Nebā Endingu Heru') Maximum Drive utilizing the Eternal Edge.

However, the Strengthening Armament is only usable in Blue Flare form.

Eternal Ridewatch (エターナルライドウォッチ, Etānaru Raidowotchi): Based on Kamen Rider Eternal Strengthening Armament[1], this Ridewatch would provide access to the EternalArmor. It is dated 2009. This Ridewatch was one of the five winners of a poll held by Bandai to select Riders to be used in a five-pack of DX Ridewatches. 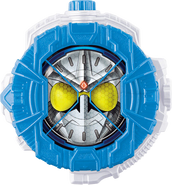 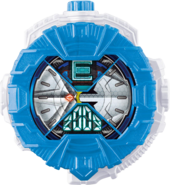 Eternal Ridewatch (Inactive)
Add a photo to this gallery

Retrieved from "https://kamenrider.fandom.com/wiki/Kamen_Rider_Eternal?oldid=540426"
Community content is available under CC-BY-SA unless otherwise noted.