The unaired pilot episode of Kamen Rider: Dragon Knight was produced in 2006. It was later leaked online before being taken down in December 2008. It is noncanon to the finalized series, as many details were changed. Content-wise, it utilizes much of the same Kamen Rider Ryuki footage as the first two episodes of Dragon Knight, as well as assorted clips from other episodes for montages of the other Riders and Survive Modes.

Life gets truly strange for Kit Taylor when his missing father appears in a mirror to tell him to return home, where Kit finds a weird deck of Advent Cards. Suddenly monsters are appearing in every mirror and window and abducting people. Kit rushes to the aid of Maya—a reporter under attack by these mirror monsters—only to be pushed aside by a mysterious hero.

Kit Taylor appears in an empty city where everything is reversed while wearing a strange armor suit and gets chased by a giant bronze spider.

Earlier that day: Kit is celebrating his 18th birthday in Mrs. Mowry's foster home. When he blows out the candle, however, he finds himself on an abandoned rooftop, where his missing father's image on a nearby building's window-covered side tells him to "come home"; a red dragon jumps out at him and he finds himself back at the party. Afterwards, Kit returns to his dad's old apartment; he'd disappeared a year ago, and many other people had gone missing since. There Kit finds a blank Advent Deck; while standing on the balcony, Dragreder leaps out of a nearby reflection at him, but the Deck and its Seal Card deflect the dragon. Suddenly, Kit starts seeing humanoid creatures appearing around the city and grabbing people, pulling them into reflections. He goes to save a woman from several of the monsters, but she can't see them; he pulls her to a park, trying to fight off the monsters. The woman, Maya Young, pulls out a camera to photograph Kit fighting nothing, but he pulls her into the fight when one of the monsters goes after her, and she ends up ramming into one, giving her the ability to see them. It tries dragging her through a reflection, but a man on a motorcycle rides out and starts fighting them; the monsters disintegrate after he knocks them to the ground.

Kit and Maya run elsewhere, but the man, Len, catches up and demands the Advent Card Kit had found. Suddenly the world blurs, alerting them to another monster attack, a Dispider chasing Maya. Kit follows, but the Deck pulls him through a window and armors him to a blank Rider form, dropping him out onto a street; the Dispider turns its attention to him. Len transforms into Kamen Rider Wing Knight, riding his Advent Cycle to ram the Dispider away from Kit. Wing Knight uses Sword Vent and attacks the Dispider, prompting Kit to try his own Sword Vent card; Kit charges as Wing Knight is pushed back, but his sword breaks on the Dispider's leg and it knocks him away. Wing Knight uses Attack Vent to call Blackwing in to slash the Dispider with its wings before triggering Final Vent and destroying the monster.

Wing Knight explains that they're in the Mirror World before Dragreder returns and attacks them; Kit has to merge with it in order to stop its rampage. On top of that, the Dispider is regenerating itself into a new centaur-like form; Wing Knight attacks it again as Kit confronts Dragreder and lets it fly into him, Kit's suit turning red as he fully becomes Kamen Rider Dragon Knight. The Dispider knocks Wing Knight off a roof and Blackwing catches him, but they are snagged by its cable-like web and fall to the ground; it shoots spines at them, but Dragon Knight jumps in and knocks the spines away. Dragon Knight uses his new Sword Vent and attacks the Dispider, activating Final Vent and destroying it.

Kit and Len return to the real world as Len explains: as Kamen Riders, they have to fight the renegade General Xaviax, who was exiled from the Mirror World thousands of years ago by the Riders and whose minions kidnap people from Earth, like Kit's dad, to increase his power. The 12 Riders protected the Mirror World, but Xaviax returned and found their tomb, stealing their Advent Cards and leaving them helpless; only Len had been hidden elsewhere in case of an emergency such as this. Xaviax has begun distributing these Cards onto Earth, and Kit had found some of them. Len needs Kit's help to find and defeat any of the wrong people who may find the Cards; Kit agrees if Len helps him find his father. Together, they'll be stronger.

Back of Advent Cards 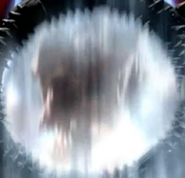 blurry image of Xaviax's face
Add a photo to this gallery

Retrieved from "https://kamenrider.fandom.com/wiki/Kamen_Rider_Dragon_Knight_(pilot)?oldid=404455"
Community content is available under CC-BY-SA unless otherwise noted.