Kamen Rider Dark Kiva (仮面ライダーダークキバ, Kamen Raidā Dāku Kiba), also known as in dialogue as the Kiva of Darkness (闇のキバ, Yami no Kiba). Dark Kiva may refer to any of the following characters.

Otoya Kurenai (A.R. World)
Add a photo to this gallery

Dark Kiva only appears to have one form, similar to that of Kiva Emperor Form, only in black and red. However, Dark Kiva does not require the use of a being such as Tatsulot to achieve this form. As Dark Kiva, the wearer has access to a unlimited potential of power that is hindered for Kiva such as telekinesis and the use of the Kiva insignia as a weapon.

In search of power stronger than the Saga armor, the Fangire created a new armor meant for the second king. The armor is also known in dialogue as the "Kiva of Darkness" (闇のキバ, Yami no Kiba), and can reach its limits by accessing the wearer's natural abilities, but it has the drawback of making the wearer lose control. The first King, now equipped with the Dark Kiva armor used the Wake Up III finisher "King's World End" during the fight against the Legendorgas. Due to the huge loss of Fangire life after the finisher was used, Knight and Pawn sealed off the use of the finishing attack.[2]

Dark Kiva Ridewatch (ダークキバライドウォッチ, Dāku Kiba Raidowotchi): Based on Kamen Rider Dark Kiva, this Ridewatch would provide access to the DarkKivaArmor. It is dated 2008. This Ridewatch was one of the five winners of a poll held by Bandai to select Riders to be used in a five-pack of DX Ridewatches. 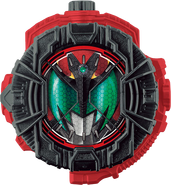 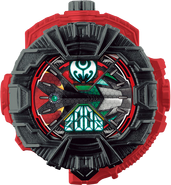 Dark Kiva Ridewatch (Inactive)
Add a photo to this gallery

Retrieved from "https://kamenrider.fandom.com/wiki/Kamen_Rider_Dark_Kiva?oldid=636719"
Community content is available under CC-BY-SA unless otherwise noted.