Kamen Rider Cronus (仮面ライダークロノス, Kamen Raidā Kuronosu) is the ultimate reward in the game Kamen Rider Chronicle. Its power is awarded to the Ride-Player who manages to clear all main Bugster bosses in the game, claiming all of the Gashatrophies as proof of their victory, in order for the player to defeat the final boss, Gamedeus. To use its power requires the ultimate Bugster antibody which is resistant against all strains of the Bugster virus.

Currently, the form of Kamen Rider Cronus has been assumed by the following users:

The following Ride-Players have obtained the potential to assume this form, but never actually transformed into it:

Nico Saiba
Add a photo to this gallery

Chronicle Gamer (クロニクルゲーマー, Kuronikuru Gēmā) is the default form of Kamen Rider Cronus, activated by pressing the Bugvisor II's A Button, inserting the Master Kamen Rider Chronicle Gashat into the Buggle Driver II, and pressing the small red button next to the Gashat slot.

The power of Kamen Rider Cronus was originally meant to be awarded to whoever could progress through Kamen Rider Chronicle all the way to Gamedeus, due to its power being the only thing that can stop him.

In this form, Cronus outclasses every Rider with a level in terms of punching power, kicking power, and speed, though he loses only slightly to Ex-Aid Maximum Gamer Level 99 in terms of jump height. However, he is outclassed by Muteki Gamer in every area.

Cronus's true power lies in his ability to manipulate time. By pressing the A and B Buttons simultaneously on his Buggle Driver II, it allows Cronus to 'Pause' and 'Restart' time itself, letting him move freely while everything else in the battlefield is frozen.

After recycling all the Energy Items into his holder case, he gains a big advantage by only letting himself use them, making him an even bigger threat. However, the Energy Items were later reclaimed by Para-DX and used against Cronus.

Currently, his Level is unknown; however, he is clearly stronger than any Level seen so far.

Multiple equipment pieces has been placed all over Chronicle Gamer:

This form is an upgrade form of Chronicle Gamer, and it is obtained by fusing with Gamedeus's Virus. Not only does Cronus retain all of his previous abilities, but his stats are also slightly enhanced as well.

Claiming himself to be the true last boss of Kamen Rider Chronicle, this form is shown to be very powerful, as he was able to fight Ex-Aid's Muteki Gamer, Snipe's Level 50 and Brave's Level 100 at once. He even defeated the second Cronus without much effort. Armed with Gamedeus's Deus Rusher and Deus Rampart, he can use all channeling techniques Gamedeus used. His shield, the Deus Rampart, can extend it's claw into a long arm that can shoot lightning and can be stretched like a tentacle.

Reprogramming Immunity
When Ex-Aid tried to reprogram him, it was proved to be useless on him.
Short-Range Teleportation
He was able to disappear in a red flash, then reappeared many steps forward to surprise his enemies.
Crimson Exploding Dragon Sword (紅蓮爆竜剣, Guren Bakuryū Ken)
He empowers his sword in red energy, which turns into a red dragon and fly around when he slash his opponent for the first time. Moments later, the dragon is absorded back into the sword, which would create a huge explosion on the second slash. The attack is strong enough to knock back even Ex-Aid Muteki Gamer and de-transform Brave Level 100 and Snipe Level 50 at the same time.

This form's finisher is the Critical Crews-Aid (クリティカルクルセイド, Kuritikaru Kuruseido): Cronus strikes his target with an energized, reverse roundhouse kick. While in action, a holographic clockwork appears beneath Cronus's feet, with the clock hands moving in synchronized manner with his counter-clockwise kick. Unlike his original form, the holographic clockwork becomes dark red. This kick is strong enough to counter-attack the same kick from the second Cronus.

Chronicle Gamer (クロニクルゲーマー, Kuronikuru Gēmā) is the default form of Kamen Rider Cronus, accessed by inserting two Kamen Rider Chronicle Gashats into the Gamer Driver and pulling the lever. The Gashat in the first slot is required to enter the last boss stage, while the second slot requires the Gashat of a Ride-Player that has cleared all prior bosses (in this case Nico's).

The power of Kamen Rider Cronus was originally meant to be awarded to whoever could progress through Kamen Rider Chronicle all the way to Gamedeus, due to its power being the only thing that can stop him.

Despite Kuroto Dan's original intention for the power of Kamen Rider Cronus to only be given to those who have specifically developed the perfect Bugster antibody, which should have taken a decade, Taiga is able to access this form through the relatively high level of Bugster virus immunity he built up over the five years since first using Proto Bang Bang Shooting. However, as noted by Masamune, this didn't let him completely master Cronus' power.

Due to the original Cronus fusing with Gamedeus, Taiga decided to become the second Cronus to defeat Gamedeus Cronus. As this version of Cronus is accessed via the Gamer Driver, Cronus can summon any of the Gashacon Weapons at his disposal.

This form's finisher is the Rider Critical Crews-Aid, a copy of the Buggle Driver II Cronus' normal version of Critical Crews-Aid, though notably weaker than Gamedeus Cronus' version. It wasn't clearly seen how this finisher was activated, though it involved the Kimewaza Slot Holder, likely moving the second Kamen Rider Chronicle Gashat there.

This form is exclusive to episode 43.

Cronus Ridewatch (クロノスライドウォッチ, Kuronosu Raidowotchi): Based on Kamen Rider Cronus, this Ridewatch would provide access to the CronusArmor. It is dated 2016. This Ridewatch was one of the five winners of a poll held by Bandai to select Riders to be used in a five-pack of DX Ridewatches.[7] 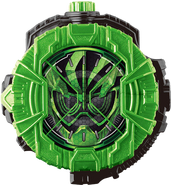 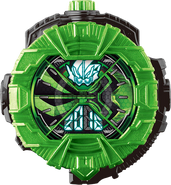 Cronus Ridewatch (Inactive)
Add a photo to this gallery

Retrieved from "https://kamenrider.fandom.com/wiki/Kamen_Rider_Cronus?oldid=686519"
Community content is available under CC-BY-SA unless otherwise noted.