Kamen Rider Chara Deco Cakes (仮面ライダーキャラデコケーキ, Kamen Raidā Chara Deko Kēki) are a promotional line of pastries made by Bandai Premium and a part of the Bandai Chara Deco Cakes.[1] They are Kamen Rider-themed cakes that come with a kind of toy such as a Candy Toy on the top of the cake. While they can be used to celebrate special days like birthdays, they are usually sold during the holidays as a way to profitably capitalize on Japan's Christmas cake holiday tradition.

More recent Holiday cakes come with an exclusive collectible transformation trinket that is Christmas-themed. Said trinket can be used both in the DX Belt Toys and in arcade games such as Ganbarizing to unlock exclusive power-ups.

Some cakes also come with pamphlets for downloadable photo apps and special "Rider Hero Number" cards that younger fans can use to call to have a special conversation with the Kamen Rider of that year's series. In some cases, 3 lucky kids will get to have the Kamen Rider visit their home and deliver the cake by being picked from a drawing.[2] 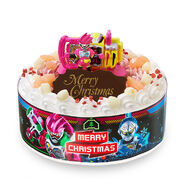 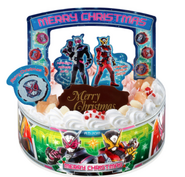 Zi-O Christmas Cake, which comes with a limited edition Christmas Ridewatch.
Add a photo to this gallery

Retrieved from "https://kamenrider.fandom.com/wiki/Kamen_Rider_Chara_Deco_Cakes?oldid=581972"
Community content is available under CC-BY-SA unless otherwise noted.