Kamen Rider Chalice may refer to any the following characters.

Hajime Shijyo
(A.R. World)
Add a photo to this gallery

Ace Form (エースフォーム, Ēsu Fōmu) is the default form of Kamen Rider Chalice assumed by scanning the Change Mantis Rouse Card in the Chalice Rouzer. Unlike the BOARD Riders, Chalice is not a Kamen Rider transformation produced by a Rider System. Chalice is the name of the Mantis Undead, whom Hajime mimics using his ability as the Joker Undead to assume the form of any other Undead. Though Chalice has especially high agility, he is superior to the Ace Forms of any of the BOARD Riders due to using the original Rouzer technology instead of an imitation. Chalice is equipped with the Mantis Undead's weapon, the Chalice Arrow, which can be combined with the Chalice Rouzer to scan Rouse Cards for special attacks instead of transformation.

Kamen Rider Wild Chalice (仮面ライダーワイルドカリス, Kamen Raidā Wairudo Karisu) is Chalice's most powerful form, accessed by scanning the Evolution Paradoxa Rouse Card in the Chalice Rouzer. This fuses Chalice with all of the Hearts Suit Rouse Cards in a similar manner to Blade's King Form. Accordingly, this form grants Chalice enough power to fight evenly with Blade in King Form, a feat that no other Rider is capable of. Outside of its effectiveness in combat, this form allows Hajime to suppress his instincts as the Joker Undead. In addition, Wild Chalice has the power to fuse all of the Hearts Suit Rouse Cards into the singular Wild Card. Wild Chalice is equipped with the Wild Slasher, which he can use individually for melee combat or combine with the Chalice Arrow.

This form is exclusive in Type16. - The Destroyer Destroys the Match!.

Chalice Ridewatch (カリスライドウォッチ, Karisu Raidowotchi): Based on Kamen Rider Chalice, this Ridewatch provides access to the ChaliceArmor. It is dated 2004. This Ridewatch was obtained after Zi-OTrinity defeated Another Blade, who had absorbed Kamen Rider Blade and Chalice's powers. Since then, it is in Zi-O's possession. This Ridewatch was one of the five winners of a poll held by Bandai to select Riders to be used in a five-pack of DX Ridewatches.[3] 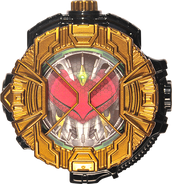 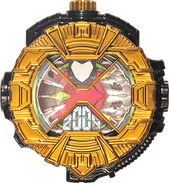 Chalice Ridewatch (Inactive)
Add a photo to this gallery

Retrieved from "https://kamenrider.fandom.com/wiki/Kamen_Rider_Chalice?oldid=644939"
Community content is available under CC-BY-SA unless otherwise noted.