A movie for Kamen Rider Black

An advert for the movie followed the broadcasts of episodes 21 and 22 of Kamen Rider Black, with an offer for 500 pairs of tickets being given away.

Originally known simply as Kamen Rider Black during its theatrical release. Children all over Tokyo mysteriously disappear without warning. Kohtaro suspects that the Gorgom are behind the abductions and follows a suspicious-looking tour bus with kids on it, only to lose its trail off a cliff. With the help of a fisherman (played by Ishinomori himself), Kohtaro travels to a remote island and uses his abilities as Kamen Rider Black to save the kids and foil Gorgom's latest evil scheme. 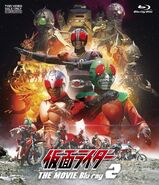