Arcade
Kamen Rider Battle: Ganbaride (仮面ライダーバトル ガンバライド, Kamen Raidā Batoru Ganbaraido, Masked Rider Battle: Ganbaride) is a combination of an arcade game and a collectible card game featuring the protagonists of the Kamen Rider Series. The game was released as part of the 10th anniversary of the Heisei run Kamen Rider Series by Toei, TV Asahi, Ishimori Productions, and Bandai and features heavy tie-ins with the television series Kamen Rider Decade, whose protagonists use cards similar to those used in the game.

It is played in a similar fashion to Sega's Mushiking and Dinosaur King games, and uses special Data Carddass cards released by Bandai. The game's card input resembles and functions similarly to the Decadriver in Decade. As the series progresses, the game controls change to suit the new Kamen Rider. During the airing of Kamen Rider OOO, Ganbaride arcade systems included an OOO Driver interface for the toy Core Medals, and with the broadcast of Kamen Rider Fourze, slots for the Astro Switches become available.

McDonald's restaurants in Japan have released special promotional Ganbaride cards with their Happy Meals to tie in with the various Kamen Rider films in Japanese theaters at the time.

The game uses two different kinds of cards. The red Hero Cards (ヒーローカード, Hīrō Kādo) represent the Kamen Riders (and, more recently, some Imagin) and are used by the player at the start of the game to form their team. Hero Cards are marked by a number of parameters, including Attack, Defense, Power, and a Finishing Move, as well as the slots which represent the character's ability to attack. Each Hero Card also has an attribute that determines advantage and disadvantage using a Rock-paper-scissors system: Speed (速, Hayasa) cards have an advantage over Power (力, Chikara) cards, which have an advantage over Technique (技, Waza) cards, which have an advantage over Speed cards. Though the cards are labeled Kamen Ride (カメンライド, Kamen Raido), Attack Ride (アタックライド, Atakku Raido), and Form Ride (フォームライド, Fōmu Raido) as per the Kamen Rider Decade television series, all three function identically within Ganbaride.

At the start of the game, the player forms his team by scanning two Hero Cards, the first being his main hero and the second being his support, performing extra attacks or shielding the main Rider from attacks as determined by their Guard trait. Alternately, the player can choose to play as Kamen Rider Decade in the form of one of the nine Heisei Kamen Riders by pressing the Belt Button in lieu of scanning a main Hero Card, then scanning a card representing the hero whose form he wishes Decade to use. Compatibility between the two heroes is also an important factor, as more compatible Riders gain bonuses. Before each round, the player performs a Belt Lamp Roulette, which gives further bonuses. During the Attack Phase, the player team and opposing team use a roulette slot system to determine their attacks, which are divided by type (for example, punches, kicks, and weapon attacks) and power. Whichever team has the highest combined value attacks first; in the event of a tie, a Rider Rush occurs, in which both sides must press the buttons rapidly, with the winner automatically performing a Fierce Attack. The Fierce Attack is the Rider's strongest attack on the roulette slot; if one team performs a strong enough attack, it can stun the opponent temporarily, making them lose their turn (assuming they haven't gone already). If either team gets two of the same type of attack icon (for instance, two kicks), the Riders will perform an extra-powerful Double Attack.

The second round and all subsequent rounds allow the use of Special Cards, as well as Memory Change, an ability unique to Kamen Rider Double that lets him change between his many forms. Only one Special Card and one Memory Change can be used per battle (though using one does not preclude the other). As the battle continues, each team builds up Rider Power, shown on the bottom of the screen as a meter. When the meter is 70% full, the team leader can perform his Finishing Move; at 100%, a Double Rider Finisher can be performed. Usually this takes the form of the secondary Rider attacking their opponent to allow the leader to perform his Finishing Move, though some teams of Riders instead perform a Double Rider Kick. During each Finishing Move's animation, the player is prompted to press the belt button at certain moments to increase the damage dealt; if a player is on the receiving end of a CPU opponent's Finishing Move, these prompts will instead reduce damage taken. Sometimes, thanks to proper support from the secondary Rider, a team may receive Rider Guts when knocked out, restoring some health and allowing them to continue fighting. Play proceeds until one team is defeated; if a battle continues for four or five rounds without a clear winner, the game may declare a Final Round, introducing a Sudden Death element by reducing both teams to 1 Hit Point but filling their Rider Power to 100%, meaning the first team to land a successful attack wins.

Some Riders receive unique bonuses when first used. For example, Decade Complete Form has Complete Scan, wherein the player is prompted to scan as many Hero Cards as possible within ten seconds, receiving a bonus based on how many unique cards were inputted. If the player uses Memory Change to transform into Double CycloneJokerXtreme, he receives an Xtreme Chance, a roulette bonus similar to the Belt Lamp Roulette with four separate bonuses determined by which Gaia Memories are placed into the Prismbicker.

In Single Player, a player who performs well may receive a special EX Stage in which he faces a much stronger team. A player who performs exceptionally well may receive a Hyper EX Stage where he faces an incredibly strong team, made up of characters who are not available to players in the current upgrade (but will be included in the next expansion). Unlike normal play, if the player loses during an EX or Hyper EX Stage, there is no option to continue.

As of the change to the Kamen Rider Wizard-based interface, the game system has undergone several changes. First, the rock-paper-scissors aspect has been removed, and Riders are now categorized into types, the current ones being Fire, Water, Wind, Earth, Space, Multi, Thunder, Mecha, and Kiai. It also introduced IC Cards, which allow players to have a game save, and progress through various battle stages. With the IC Cards came a leveling system, wherein winning battles with a rider from the with a specific type will level up that type. The levels not only affect the stats of the riders, but also determine their special attacks, as now Hero Cards have different special attacks depending on what level their type is. Additionally, Special Cards are now only usable at the beginning of the scan phase, rather than during combat. Another new addition are Battle Supporters, characters who can provide an assist attack once per battle. 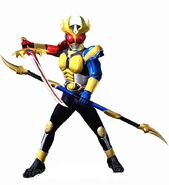 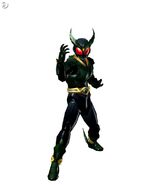 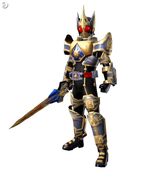 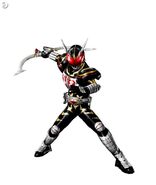 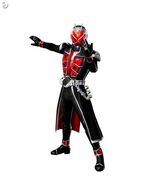 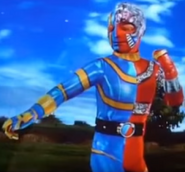