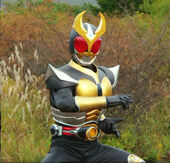 Ground Form (グランドフォー, Gurando Fōmu) is the first of Agito's numerous forms and the typical form of an Agito. This form harnesses the power of the earth, turning Agito's entire body into a lethal weapon, with bone-crushing blows and crippling locks. Of all of Agito's basic forms, the golden Ground Form is the most balanced, with power, speed and strength working in harmony to make the most of its capabilities.

At its peak, the Cross Horn crest upon his head extends, pushing all of Agito's capabilities to their fullest, channeling power into his legs to execute his Rider Kick (ライダーキック, Raidā Kikku), a jump kick of incredible raw power and force; with a force of 30-tons. Upon the Machine Tornador, Agito can execute the Rider Brake (ライダーブレイク, Raidā Bureiku), jumping off the Machine Tornador at full speed, and Dragon Breath (ドラゴンブレス, Doragon Buresu), which involves ramming the side of the Machine Tornador into the enemy. Ground Form has also been shown to be able to use a Rider Punch (ライダーパンチ, Raidā Panchi).

Storm Form (ストームフォー, Sutōmu Fōmu) is Agito's second form, accessed with the left switch on the Alter Ring, "opening the Blue Dragon's Eye". The blue Storm Form harnesses the power of wind through its left arm, and imparts Agito with supernatural agility and reflexes. The most nimble of Agito's forms, Storm Form maneuvers with such swiftness and cunning that its movements parallel foresight. However, while superior in overall speed and agility, Storm Form is by far the weakest form in terms of power and strength.

Flame Form (フレイムフォー, Fureimu Fōmu) is Agito's third form, accessed using the right switch on the Alter Ring, "opening the Red Dragon's Eye". The searing power of flame flows through its right arm and blesses Agito with incredible strength. Aside from its apparent superiority in the areas of power and defense, the Flame Form possesses phenomenal heightened senses; his senses have increased to point where an enemy's presence - whether distant, hidden, and/or invisible to the naked eye - can be detected with frightening precision.

Trinity Form (トリニティフォー, Toriniti Fōmu) is Agito's first true upgrade accessed when Shouichi Tsugami briefly recovered his memory, combining the power of all of Agito's basic forms. This form, a combination of Ground, Storm, and Flame, harnesses the strongest qualities of Agito's powers and execute the forms' finishing attacks. In this form, Agito can wield both the Storm Halberd and the Flame Saber. Unfortunately, when Shouichi once again loses his memory, the power of the Trinity Form is sealed away.

Burning Form (バーニングフォー, Bāningu Fōmu), known as "the power awakening to infinite possibilities", is Agito's super form born when Shouichi learns to channel his fighting spirit into power. Its incredible power is difficult to control and hard on the body of those who transform into it, incapacitating Shouichi before he mastered it.

Shining Form (シャイニングフォー, Shainingu Fōmu), entitled the "evolution of infinite possibilities," is Agito's final form awoken by the light of the sun. It is an evolution unlike anything ever anticipated by the OverLord, born when Shouichi molts after having mastered the power of Burning Form. Although the power of his fists remain unchanged, all of his other attributes are pushed to their peak, making Shining Form Agito's greatest form.

Shouichi Maguichi becomes Mirage Agito (ミラージュアギト, Mirāju Agito). Visually, he resembles a white colored Kamen Rider Agito Shining Form with an extended left horn and a small cape extending from his left shoulder. This form boasts extraordinary physical prowess, enough to overwhelm Agito Shining Form and Kamen Rider Exceed Gills. However, Maguichi is the only Agito to use this form.

Final KamenRide: Agito Shining
Add a photo to this gallery 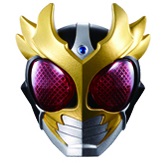 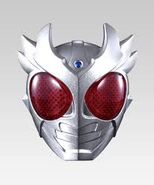 Nominally used by Zangetsu Shin, the Agito Lockseed (アギトロックシード, Agito Rokkushīdo) is used in the Sengoku Driver or Genesis Driver to access Agito Arms. Its finishers are based on Agito's forms: 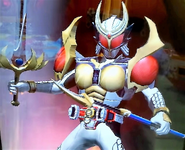 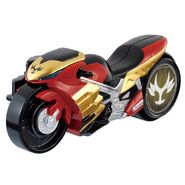 Primarily used by Specter, the Agito Ghost Eyecon (アギトゴースト眼魂, Agito Gōsuto Aikon) is used in the Ghost Driver to access Agito Damashii. It is only used in Kamen Rider Battle: Ganbarizing.

Agito Parka Ghost
Add a photo to this gallery

Primarily used by Genm, the Agito of the Sun Gashat (太陽のアギトガシャット, Taiyō no Agito Gashatto) is used in the Gamer Driver to access Agito Gamer Levels 1 and 2. It is only used in Kamen Rider Battle: Ganbarizing.

Agito of the Sun Gashat

Primarily used by Zi-O, the Agito Ridewatch (アギトライドウォッチ, Agito Raido Wotchi) can be inserted into the left-hand side of the Ziku-Driver to access AgitoArmor.

Zi-O AgitoArmor
Add a photo to this gallery

Retrieved from "https://kamenrider.fandom.com/wiki/Kamen_Rider_Agito_(Rider)?oldid=435798"
Community content is available under CC-BY-SA unless otherwise noted.