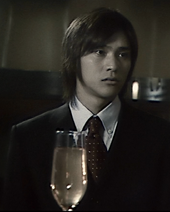 Jun Rikido
Add a photo to this gallery

Just like Hongo, Ichimonji's Rider Suit has gone through significant changes. In Rider 2's initial appearances from episodes 14 up till 52, his suit was slightly similar to Rider 1's but with a silver stripe down the helmet, lines on the sides of the body and a red belt strap to differ from Rider 1. In later appearances, Rider 2 would sport a silver-coloured helmet and red gloves and boots. Rider 2's helmet changed to black from mid-V3 through ZX, to differentiate further from Rider 1, but the original helmet returned from Black RX onwards up till today. The black helmet returned briefly in Movie War Megamax and in Super Hero Taisen.

Originally created to best and kill the traitor Takeshi Hongo, Hayato was modified to be capable of transforming via stylish hand positions to absorb wind power as opposed to Takeshi's need for a outside source of wind power to charge him, becoming a more versatile fighter as a result. However, Hayato was rescued by Hongo before being brainwashed, and fights against Shocker during Takeshi's absence. Like Hongo, Ichimonji seems to require no food or water whatsoever.

The original manga gave an in-depth analysis of the entire schematics used by Hongo, Ichimonji, and the Shocker Riders.

The form displayed by Hayato upon his return from Nanki, Kamen Rider 2 dons the title of New 2 (新２号, Shin Nigō) while gaining an upgrade to his capabilities to the extent of surviving and apparently unharmed by the effects of a nuclear bomb. Retaining his great strength from the original stage, Hayato now maintains the title of "Power of #2" (力の２号, Chikara no Nigō), an aspect later passed to Kamen Rider V3. (Episode 72 and onward appearanes)

Sometimes, Hayato's helmet would take on the coloration of his old one in order to further differentiate 2 from 1.

For the reboot movies, Rider 2 was given a sleeker and more modernized design with a color scheme similar to the old Rider 2 suit used in the original series, though the helmet was given a lighter green instead of the original dark green.

Kamen Ride 2 (カメンライド２号, Kamen Raido Nigō) is the Kamen Ride Card which contains the power of Kamen Rider 2. In All Riders vs. Dai-Shocker, Decade Complete Form Jumbo Formation performed the Final Dimension Kick, a variation of the Dimension Kick, transforming the Shōwa Riders, including Kamen Rider 2, and Heisei Riders into Kamen Ride cards for Decade to travel through as opposed to Final Attack Ride cards before hitting the target.

2 Switch (2号スイッチ, Nigō Suitchi, Square): An Astroswitch bearing the likeness of Kamen Rider 2. In Kamen Rider Battle: Ganbaride, it can be used by Kamen Rider Fourze to arm him with the 2 Module (2号モジュール, Nigō Mojūru) on his left arm, boosting his punching power.

The 2 Switch appears on-screen in Movie War Mega Max, when the Seven Legendary Riders are captured by Lem Kannagi. Rider 2, along with Rider 1, V3, and Riderman, were turned into Switches (while X, Amazon, and Stronger were turned into Core Medals) and kept in a suitcase by a member of Foundation X. The Riders were able to return back to normal when Fourze inserted the Switches into the Fourze Driver and performed a Limit Break.

This Rider Ring which bears the likeness of Kamen Rider 2 is exclusive to Kamen Rider Wizard's Wizard Ring toyline. When used by a Wizardriver wearer, it would be able to summon Kamen Rider 2.

Kamen Rider 2 Lockseed (仮面ライダー２号ロックシード, Kamen Raidā Nigō Rokkushīdo): A Lockseed bearing the likeness of Kamen Rider 2, created when Rider 2 was defeated in the battle between the Showa Riders and Heisei Riders. Heisei Rider vs. Showa Rider: Kamen Rider Taisen feat. Super Sentai The core image depicts the Typhoon while the lid backside image depicts Kamen Rider 2's Rider Punch gesture. When inserted into a Sengoku Driver or when channeled through the Showa Rider Lockseed, it would allow an Armored Rider to assume 2 Arms (２号アームズ, Nigō Āmuzu). It's styled for Gaim, Kurokage, Bujin Gaim, and Kamuro in the toyline.

2 Lockseed
(locked & opened)
Add a photo to this gallery

This Ridewatch was obtained by Hiryu Kakogawa through unknown means and was one of the Ridewatches absorbed by him to become Another Ohma Zi-O.

2 Ridewatch
Add a photo to this gallery

Retrieved from "https://kamenrider.fandom.com/wiki/Kamen_Rider_2?oldid=679378"
Community content is available under CC-BY-SA unless otherwise noted.