Though a TV special airing in the gap between the final episode of Black and the first episode of Black RX, it was variously treated as the end of Black and the start of RX. A teaser trailer for Kamen Rider Black RX was aired following the broadcast of the final three episodes of Black, advertising it as starting on October 16th, refering to this special and not the first episode (which would air on October 23rd). On the other hand, the 'finale' of Black was followed by a standard next time trailer, for this special and it would be counted as 'episode 52' of Black on the DVD release. A clipshow, it's mostly composed of narrated footage of the first eleven Kamen Riders in their series and the then-upcoming premiere of Kamen Rider Black RX. 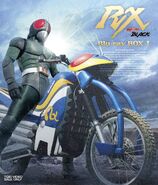 Retrieved from "https://kamenrider.fandom.com/wiki/Kamen_Rider_1_Through_RX:_Big_Gathering?oldid=619230"
Community content is available under CC-BY-SA unless otherwise noted.