Kamen Rider Wiki
Register
Don't have an account?
Sign In
Advertisement
in: Pages with reference errors, Pages using ISBN magic links, Riders with more than one identity,
and 4 more 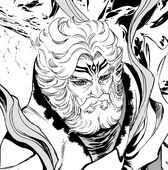 Kamen Rider 1 uses the power of the wind to fight. To transform, Hongo originally speed on his motorcycle, Cyclone, and leaps into the air, creating wind-pressure against his Typhoon belt. The pressure spins the wheel in the center of his belt which then activates the micro-nuclear engine and allows him to transform.

Later on as he grew more powerful he learned to transform by absorbing the wind by himself (although he can still use any source of wind generated outside of his powers) thus getting rid of a major weakness. Like Kamen Riders 2 and V3, Hongo has a crippling weakness to the cold and can't transform properly when hit by sub-zero coldness as shown in episode 98 of his series.

The "old" Rider did not have a shout or a pose when he transforms.

Because he was meant to be Shocker’s greatest altered human, Kamen Rider 1's capabilities are far greater than a normal man. He has the ability to hear at distances up to 4 kilometers away. He can break a meter thick tree trunk or a metal rod 10 cm thick with his Rider Chop. His Rider Kick has enough power to bend steel supports of buildings. Even when he wasn't fully transformed, this form was strong enough to withstand a 50 thousand volt electric shock.

Unlike in his later forms, Takeshi can't transform automatically in this form, needing external wind to jump start the Typhoon's turbine and give him access to his suit and most of his fighting strength. That wind is generally generated by riding his bike, but it also can come from other sources, like an explosion that pushes hot wind towards the Typhoon belt. It is thinkable that becoming Kamen Rider 1 has granted him a degree of immortality and immunity to organic diseases, viruses, bacteria and poison due to becoming a cybernetic human.

The original manga gives an in-depth analysis of the entire schematics used by Hongo, Ichimonji, and the manga Shocker Riders.

The original form of Kamen Rider 1 returned in Heisei Rider vs. Showa Rider: Kamen Rider Taisen feat. Super Sentai, as a cameo during Hongo's transformation into his current "New" Rider 1 form before the battle between the Showa Riders and Heisei Riders.

The form Takeshi shows after fighting against Shocker in Europe for some time. His appearance changed due to the effects of the constant fighting on his physical appearance and acceptance of himself.

In the TV show, this form doesn't seem to be any stronger than the original 1 form, but with stronger combat power due to Hongo's experience by this point. However, in the movie Kamen Rider vs. Shocker, this form was shown to be able to transform without needing external wind sources.

This version of Rider 1 is referred to as Sakurajima 1 (桜島 １号, Sakurajima Ichigō), due to the story arc where it debuted mostly taking place there. [Quiz! Distinguishing the First Rider]

New 1 (新１号, Shin Ichigō) is the third form of Kamen Rider 1. Takeshi Hongo is captured by Shocker and taken for a second reconstruction surgery, which gives him abilities surpassing his original ones. Hongo uses self-hypnosis to escape Shocker's brainwashing, turning their own power against them once again. [From Here to Eternity]

The upgrade allows Hongo to transform instantly, without needing external wind sources, gives him enough power and durability to survive a subzero trap and even a nuclear bomb close range with no apparent damage, and gives Hongo the versatility for different techniques that can satisfy demands otherwise unattainable in his previous forms, giving Takeshi the nickname "Skill of #1" (技の１号, Waza no Ichigō); this capability was later passed to Kamen Rider V3.

This form also gives Hongo access to Rider Power, a temporary boost in Rider 1's battle power, triggered with a switch in his new Typhoon belt, that greatly increases his strength, making Rider 1 superior to Shocker's other creations.

In Ultraman vs. Kamen Rider, Rider 1 gains the ability to grow to Ultraman's size in order to balance out their size differences.

In the Kamen Rider 1 film, which celebrates the franchise's 45th anniversary, Kamen Rider 1 is given another stronger Power Up (パワーアップ, Pawā Appu) upgrade version of his final form, which sports a bulkier suit fitted with a lot more armored sections, to fit Takeshi's current aged physique. The suit also takes on a color scheme similar to the one used by the Sakurajima 1 suit. The suit also sports a modern version of the Typhoon, which has a shielded metal cover to protect the belt's fan turbine when Takeshi isn't transformed.

The "old" Rider did not have a shout or a pose when he transforms. 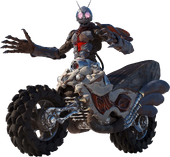 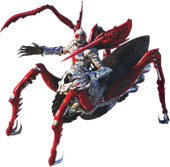 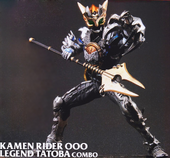 . Previously, in All Riders vs. Dai-Shocker, Decade Complete Form Jumbo Formation performed the Final Dimension Kick, a variation of the Dimension Kick, transforming the Shōwa, including Kamen Rider 1, and Heisei Riders into Kamen Ride cards for Decade to travel through as opposed to Final Attack Ride cards before hitting the target. Unlike his other Kamen Rides, Decade's Decadriver changes along with his costume, taking on the appearance of the Typhoon Belt. However, when Captain Marvelous (as Akarenger) strikes the "Typhoon" during battle, it seems to short out and changes back into the Decadriver, revealing "Rider 1" to be Decade after all.

1 Switch (1号 スイッチ, Ichigō Suitchi, Cross): An Astroswitch bearing the likeness of Kamen Rider 1. In Kamen Rider Battle: Ganbaride, it can be used by Kamen Rider Fourze to arm him with the 1 Module (1号モジュール, Ichigō Mojūru) on his right leg, boosting his kicking power and jumping height.

The 1 Switch appears on-screen in Movie War Mega Max, when the Seven Legendary Riders are captured by Lem Kannagi. Rider 1, along with Rider 2, V3, and Riderman, were turned into Switches (while X, Amazon, and Stronger were turned into Core Medals) and kept in a suitcase by a member of Foundation X. The Riders were able to return back to normal when Fourze inserted the Switches into the Fourze Driver and performed a Limit Break.
This Rider Ring which bears the likeness of Kamen Rider 1 is exclusive to Kamen Rider Wizard's Wizard Ring toyline. When used by a Wizardriver wearer, it would be able to summon Kamen Rider 1.

Kamen Rider 1 Lockseed (仮面ライダー１号ロックシード, Kamen Raidā Ichigō Rokkushīdo): A Lockseed bearing the likeness of Kamen Rider 1, created when Rider 1 was defeated in the battle between the Showa Riders and Heisei Riders. [Heisei Rider vs. Showa Rider: Kamen Rider Taisen feat. Super Sentai] The core image depicts the Typhoon while the lid backside image depicts Kamen Rider 1's Rider Kick gesture. When inserted into a Sengoku Driver or when channeled through the Showa Rider Lockseed, it would allow an Armored Rider to assume 1go Arms (１号アームズ, Ichigō Āmuzu). It is styled for Gaim, Kurokage, Bujin Gaim, and Kamuro in the toyline.

This Ridewatch was obtained by Hiryu Kakogawa through unknown means and was one of the Ridewatches absorbed by him to become Another Ohma Zi-O.

Batta Vistamp[14] (バッタバイスタンプ, Batta Baisutanpu, lit. "Grasshopper Vistamp"): Allows Demons to access his Batta Genomix. It contains the genetic information of a grasshopper and is based on Kamen Rider 1. 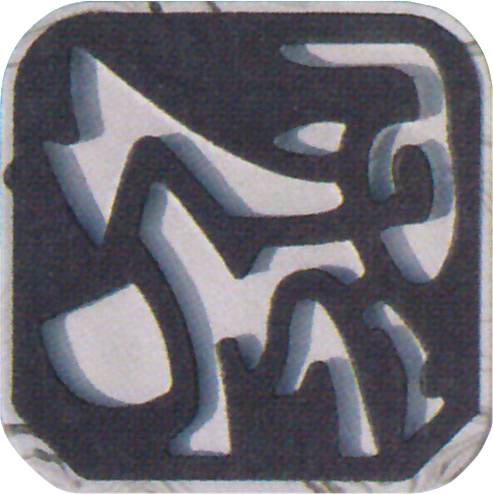