The second part is Kamen Rider OOO portion called Kamen Rider OOO: Ankh's Resurrection, the Medals of the Future, and the Leading Hope (仮面ライダーオーズ アンク復活と未来のメダルとつながる希望, Kamen Raidā Ōzu: Anku Fukkatsu to Mirai no Medaru to Tsunagaru Kibō), where the cast of OOO battle a mysterious Kamen Rider from 40 years in the future.

The fourth part is Kamen Rider Fourze portion called Kamen Rider Fourze: Nadeshiko, Descend (仮面ライダーフォーゼ 撫・子・降・臨, Kamen Raidā Fōze: Nade・Shiko・Kō・Rin), where the Kamen Rider Club encounters a mysterious girl Gentaro Kisaragi immediately falls head over heels in love with her. However, they not only have to protect her from the Horoscopes, but also deal with Foundation X and their new creations: the Super Evolved Life Form Mutamits (超進化生命ミュータミット, Chō Shinka Seimei Myūtamitto).[6]

The fifth and final part of the film is Movie War Mega Max: Gather! Warriors of Glory (MOVIE大戦MEGA MAX 集結せよ! 栄光の戦士たち, Mūbi Taisen Mega Makkusu: Shūketsuseyo! Eikō no Senshi-tachi). Foundation X's Lem Kannagi reveals that he plans to use the SOLU harvested from the meteorites that have been striking the Earth and combine it with the powers of the Zodiarts Switches and the Core Medals in order to eliminate the Kamen Riders so he can conquer all of humanity, betraying Foundation X in the process. When his plan comes to light, Gentaro Kisaragi and Eiji Hino team up with Shotaro Hidari, Philip, and the legendary seven Kamen Riders to take on Foundation X to save the world.

Meteorites fall from space all over the world, carrying a mysterious substance called SOLU.

As Kamen Riders 1, 2, V3, and Riderman battle Dustards and Kuzu Yummy in Europe, Kamen Riders X and Amazon fend off Masquerade Dopants in Chile. In the Middle East, holding off all three grunt types, Kamen Rider Stronger fails to stop Foundation X from retrieving the SOLU. In Japan, Foundation X agent Lem Kannagi reports his progress to Controller Kiima and proceeds in the next phase of his plan.

OOO: Ankh's Resurrection, The Medal of the Future and The Leading of Hope

One of meteorites causes a time hole to open in Japan as a bloodthirsty Kamen Rider from 40 years in the future emerges to fight this era's Kamen Riders. As Kousei Kougami informs Shintaro Goto of the event, giving him the Birth Driver while revealing to have been researching the means to recreate the Core Medals, Erika Satonaka informs Hina Izumi as they make their way to the airport to meet Eiji Hino. However, the ladies are attacked by Kuzu Yummy with Satonaka attempting to fight them off with the Birth Buster before Eiji arrives to save Hina in the nick of time. However, the mysterious Kamen Rider appears and knocks him out as Akira Date arrives and becomes Kamen Rider Birth·Proto Type to fight the enemy before Shintaro arrives and joins the fight as Kamen Rider Birth. The two Kamen Rider Births are easily overpowered with Date's Birth Driver damaged beyond repair.

However, "Eiji", revealed to be the Greeed Ankh, manages to rip out some of the Core Medals from inside the Kamen Rider as the real Eiji arrives, becoming Kamen Rider OOO and assumes the Random Combos Gatatoradol and Gatagorietar to weaken the enemy. But upon realizing something is off, Kamen Rider OOO hesitates as the enemy Kamen Rider escapes. Soon after, Ankh resumes his usual form, with Date and Shintaro hospitalized. The gang go to Cous Coussier where the Greeed refuses to explain the circumstance of his return while Eiji reveals that the Kamen Rider may not be acting of his free will due to the Core Medals inside him. But suddenly, several Kuzu Yummy burst into Cous Coussier and Eiji and Ankh hold the homunculi off while Hina and Chiyoko Shiraishi get everyone else to safety.

Arriving at the location of the time hole just as Kamen Rider Poseidon is about to leave, as Ankh holds some Kuzu Yummy off, Eiji becomes Kamen Rider OOO to fight Kamen Rider Poseidon with Date, Shintaro, and Satonaka providing back up. Managing to face his phobia of water, Michal joins the fight as Kamen Rider Aqua to face Poseidon on the water before taking their battle on land. Assuming Tajadol Combo, Kamen Riders OOO and Aqua combine their signature attacks to destroy Kamen Rider Poseidon. After Kamen Rider Aqua leaves, Ankh is nowhere to be seen as Eiji reveals to Hina that Ankh actually came from the future, giving him hope that he will somehow revive their friend. However, the two are caught off guard by an explosion as Kannagi retrieves Poseidon's Core Medals.

In Futo, Shotaro Hidari chases after a Foundation X convoy before managing to stop it. As Philip is preoccupied, Shotaro decides to become Kamen Rider Joker to destroy the Kamakiri and Kabuto Yummy. By then, Kannagi and his two aides arrive to a secret airport to enter their spacecraft the Exodus and install Kamen Rider Poseidon's Core Medals into a Driver before the Seven Riders arrive. After disposing of the interlopers, Kannagi states that only SOLU is needed. However, Kamen Rider Joker's interference causes the SOLU sample to leak into the sewer.

At Amanogawa High School, they are hosting a cultural festival where Gentaro Kisaragi gets his fortune told by Mr. Chuta Ohsugi before the Kamen Rider Club, consisting of Gentaro and his friends space nerd Yuki Jojima, budding scientist Kengo Utahoshi, football team captain Shun Daimonji, cheerleader Miu Kazashiro, and goth Tomoko Nozama, begins its dedication to the past Kamen Riders. However, other than social butterfly JK being a no show, a mysterious girl falls from the sky as Gentaro saves her and they take her to the hospital. The Kamen Rider Club learns her name to be Nadeshiko Misaki from Subaruboshi High School before the group is attacked by Dustards.

Realizing that the Dustards are after her, Gentaro protects Nadeshiko from them before he transforms into Kamen Rider Fourze to fight just as Nadeshiko suddenly transforms into Kamen Rider Nadeshiko to help take out the Dustards. Soon after, the Virgo Zodiarts arrives to demand Nadeshiko Misaki from Kamen Rider Fourze as he assumes Elekstates to fight the Horoscopes. Deciding to change back into Basestates, Kamen Riders Fourze and Nadeshiko execute a Double Rider Rocket Punch to force the Virgo Zodiarts to fall back. After, the Kamen Rider Club learns that Gentaro is in love with Nadeshiko. Spiriting Gentaro off before she can answer Kengo's questions of where she obtained her Kamen Rider system from, Nadeshiko starts to become more vocal as she and Gentaro become closer before he takes her to the Rabbit Hatch. When Nadeshiko takes off her space helmet to kiss him, Gentaro realizes that she is not human.

Kengo reveals that she is one of the Seeds Of Life from the Universe, or "SOLU", an alien lifeform that mimics what it sees. Though Kengo explains that a SOLU is unable to be truly conscious, Gentaro refuses to accept it as he runs off. After Yuki manages to cheer him up, Gentaro refuses to let Nadeshiko go as he takes the container holding her from Foundation X posing as college scientists. Touched by Gentaro's feelings for her as she emerges from the container, Nadeshiko hugs him out of gratitude before Foundation X decides to take Nadeshiko by force as Kamen Rider Fourze chases after them on the Machine Massigler before forced to fight Katal as he mutates into the Mutamit Suddendath. After Shun uses the Powerdizer to help in the fight, Nadeshiko becomes Kamen Rider Nadeshiko to fight Foundation X's Masquerade Dopants before joining Kamen Rider Fourze in defeating Suddendath.

Meeting up with Shotaro and Philip, Gentaro introduces himself as he and Shotaro hit it off before he explains the nature of Foundation X with its agent Kannagi having betrayed the organization to take over the world. However, Kannagi sends his remaining aide Solaris to finish the Kamen Riders off by becoming the Unicorn Zodiarts while her followers become the Orion, Chameleon, and Hound Zodiarts. To return the favor to Eiji for before, Shotaro and Philip become Kamen Rider Double to hold off the Foundation X Zodiarts as Eiji and Gentaro assume their Kamen Rider forms to reach Kannagi.

Now a being of pure energy, Nadeshiko departs the Earth for space as the Kamen Riders re-enter the atmosphere. As Eiji resumes his journey with his hope for Ankh's return stronger than ever, Gentaro encounters the real Nadeshiko Misaki just as he goes back to school however she walks past him without acknowledging him. Broken-hearted, Gentaro is welcomed back by his friends at Kamen Rider Club, making him feel better.

After the credits, the final few members of Kannagi's forces attempt to get away when they encounter a mysterious black and blue Kamen Rider who announces himself as Kamen Rider Meteor. He easily dispatches his foes before canceling his transformation into a young man who was unimpressed by his enemies, and notes that he should find his target at Amanogawa High School.

The film's theme song is "SAMURAI STRONG STYLE", performed by Show Ayanocozey and Marty Friedman. A special remix of "Anything Goes!" performed by its original artist Maki Ohguro alongside guest vocals from Shu Watanabe was featured in the film.

The film also marks the debut performance of "Shout Out", the insert song to OOO's Shauta Combo, having never been used in OOO's broadcast run. 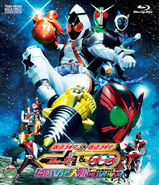 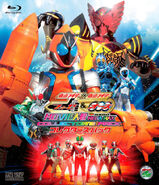