Teruaki Sugihara
Kamen Rider: Reiwa The First Generation (仮面ライダー 令和 ザ・ファースト・ジェネレーション, Kamen Raidā Reiwa Za Fāsuto Jenerēshon) is a Japanese superhero crossover film between Kamen Rider Zero-One and Kamen Rider Zi-O, the first successor to the Heisei Generations Series, and the 11th Movie War film overall. Serving as a tribute to the original Kamen Rider series, Sougo travels to the World of Zero-One to assist Aruto in fixing the damages caused by a Time Jacker, while Aruto learns of his family's history as well as his own powers. Kamen Rider Thouser makes a brief appearance in the film before his in-series debut.

The catchphrase for the movie is "The future is right here." (「未来は、ここにある。」, "Mirai wa, koko ni aru.")

After the premiere of Kamen Rider Heisei Generations FOREVER, Toei announced a Movie War crossover film between Kamen Rider Zi-O and the first succeeding Rider of the Reiwa era to premiere in the Winter of 2019, which was tentatively titled Kamen Rider Next Generations 2020.[1]

After the premiere of Kamen Rider Zi-O: Over Quartzer, which featured a cameo appearance from Zero-One, the Movie War film's title was officially revealed and premiered on December 21, 2019.[2]

12 years ago, the Daybreak Town Accident changed the world and brought forth a new prosperity towards artificial intelligence. But what if that were to all change?

Sougo Tokiwa gave up his conquest for power after he chose to reset the world and live a mundane life. However as a Time Jacker began to alter history once again, Sougo is forced to take up the mantle as Kamen Rider Zi-O once again, as he meets Aruto Hiden, the native Rider of the world he has to save.

This is the story of two Kamen Riders from two different worlds, whose fight together will ultimately determine the fate of all reality.

Aruto Hiden wakes up from a dream he had of the Daybreak Town Accident. Realizing that he was late, he hurriedly rushed out of his apartment for Hiden Intelligence, spotting several types of Humagears he didn't know existed on the way. Arriving at the building, Aruto is subdued by the Humagears in the building and is shocked to discover that there was a new CEO, Will, who attacks him as Another Zero-One.

At Hikarigamori High School, Tsukuyomi poses a question to both Sougo and Geiz, asking them what they'd do should the world end. Upon reaching their classroom, they discover that all the faculty and students were robots, who were teaching themselves their revolution against humanity. After their teacher and the students deduced the trio to be humans, they move in and attack them, but Woz arrives and rescues them, later restoring their memories.

Aruto is thrown out of the building and activates his Driver, but the Rider Model mystically appears from the ground. He transforms into Zero-One to fight him, but his powers were sapped away shortly and his Driver taken. With no choice left, Aruto runs from the Humagears attacking him in public led by the Berotha Magia and Okureru as the Kuehne Magia. He was later rescued by Isamu Fuwa and Yua Yaiba and taken to the human resistance. After meeting Izu, who explained that there was a temporal disturbance in their universe, a platoon of Humagears led by Will, Horobi, and Jin began to raid the resistance base. Wanting to help fight, Soreo Hiden gives him a Forceriser, allowing him to transform into Kamen Rider Zerozero-One. In the midst of the resistance's defeat, Zi-O's team arrived and were successful in driving the Humagear force back. After explaining that the cause of this was due to Finis, a Time Jacker, Aruto goes back to 2007, 12 years in the past with Zi-O's team.

At the HidenExpo 2007 conference, Korenosuke Hiden presented the Humagears to the audience. In his office, his secretary Will expressed a desire to also be happy from taking over human labor. Disregarding this as an error, Korenosuke laughs it off. Arriving in 2007, Aruto and the Zi-O team reach the development factory and fight the Humagears that were terrorizing the workers. Aruto confronts Kamen Rider Ichi-Gata, whom he recognized as his father at the time. Soreo says that he will bring happiness to Humagears. It is revealed that he is working on the Ark Satellite, which caused the events to happen in the present day.

Finis arrives and presents Will with the Another Zero-One Watch, explaining that in the future, the revolution was stopped. Somewhere nearby, the Zi-O team encounter Finis, who wants to take all of the Kamen Rider powers for themself to prevent the rise of Ohma Zi-O. By corrupting the powers they took from Sougo, they transform into Another 1, and Sougo transforms into Zi-OTrinity. Later, Sougo and Geiz fight the Another Rider using their Time Mazines. Geiz throws his Time Mazine into the Another Rider, but becomes damaged and is forced to abandon it.

Now armed with the powers of Another Zero-One, Will attacks Soreo, who also revealed that he was planning on destroying the satellite so that humanity doesn't fall. Both Aruto and Soreo transform to fight Will, but he takes them both down and stops Soreo's bomb. Satellite Ark then launches into space, activating its control over all the Humagears on Earth. Will returns to Hiden Intelligence and kills Korenosuke while Soreo, now controlled by the Ark, attacks Aruto. Another 1 arrives in their area, and Geiz saves Aruto, telling him that there's nothing else they can do in that time period. Sougo picks them up and they return to 2019.

Returing to the resistance base, the resistance tell Aruto that Izu gave herself up to stop the attack and was taken by Will. Aruto heads over to the conference center and exclaims his dream of a coexistence between human and Humagear. After Soreo reveals himself in the audience, Shesta announces that an emergency vote will occur at this point, for as to whenever Aruto should become president. As Soreo held the majority of the stocks at the company, his vote is absolute. In the end, he voted no, and the Ark corrupted every single HumaGear in the audience, in which Will sends to attack Aruto. In the lobby, the resistance as well as Zi-O's team arrive to help fight the Humagears. Aruto faces his father and announces his intent to defeat his father and regain his powers. Elsewhere, Horobi and Jin fight Geiz, Tsukuyomi, and Woz, and Isamu and Yua fight a group of Humagears outside, later taking out Another Zero-One themselves.

Sougo confronts Finis, who had used Geiz's Time Mazine to come from the past. They both transform into Zi-O II and Another 1 respectively and fight. Aruto continues his fight with this father, who ultimately let his son defeat him, later revealing he was faking his evil nature this whole time, to ensure that Aruto was serious about having both human and Humagear coexist. With his death and "yes" vote, Aruto becomes president and receives the Zero-One Driver.

Another 1 absorbs Geiz's Time Mazine and becomes Another New 1. The Zea satellite is launched, and Aruto transforms into Zero-One to help Zi-O fight Another 1. Zero-One attacks them with Rocking Kaban Strash, and they attack them with other Progrisekeys and GrandZi-O. They finally finish them with their combined 'Rising Impact Time Break'. Everything returns to normal. Daybreak Town, Soreo, and Ark meet their original fates once again.

Later, Aruto and Team Zi-O meet again. Woz tells Aruto that everything has turned back to normal and only him and Izu will remember the events due to being connected to each other through Satellite Zea. Before leaving, Sougo says that he must erase Aruto's memories as well in order to return everything to normal. Aruto resists and both of them transform and engage into a friendly duel.

Mid-Credits Scenes
Everything returns to normal. Jin and Horobi, back in their base, wonder for how long would humanity continue to rule over the Earth. Jun immediately calls Shesta and Sanzo and requests them to create a Rider System for him while he practices his pose. Fuwa tells Yua about a dream in which he was turned into a Humagear. He asks Yua to destroy him if such a thing happens in reality. Yua asks him about his actions if she is turned into one, and Fuwa assures her that he will crush her.

Sougo, Geiz and Tsukuyomi return to their High School. Sougo teases Geiz because the latter slept during the class, but Geiz disagrees. Tsukuyomi comments that the truth is written on Geiz's face, which reminds Sougo of Zi-O's visor, but he doesn't tell them about it.

Aruto misses Soreo while staring at the Humagear body in his office. When Izu arrives, he asks her to change the design of his business cards and explains it, but Izu remembers Aruto's recent journey through timeline.

Post-Credit Scene
On the boundary of the Daybreak Town stands a golden Kamen Rider under the moonlight. He claims that his schemes are going exactly as he planned, or instead at 1000% rate.

The film's theme song is Another Daybreak, performed by both J & Takanori Nishikawa, who also performed Zero-One's theme song REAL×EYEZ. The film's original soundtrack is included in the Kamen Rider Zero-One CD Box. 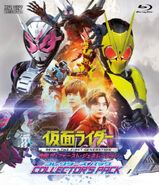