PlayStation 4
Kamen Rider: Climax Fighters is a Japanese fighting game developed by Eighting and Bandai Namco Entertainment exclusively for the PlayStation 4. Serving as the sequel to Climax Heroes Wizard, it is the first in the Climax Fighters reboot and the sixth overall installment of the Kamen Rider: Climax series. The game formally features Riders that were previously introduced in the Battride War series such as Gaim, Drive, Ghost, Ex-Aid and the new Build as playable characters, including most Heisei-era Secondary Riders such as Beast. A sequel featuring Zi-O was released in 2018.

Along with the original Japanese release, an English localization of the game was released to several Asian countries with English subtitles. A Korean localization published by Daewon Media in South Korea was released coupled with a Korean-dub. A Chinese localization was also released in Taiwan and Hong Kong.

The game has several player modes: Mission Mode, Player vs. Player, 2 on 2 Battle and a Battle Royale mode that lets up to 4 players fight offline or in an online global 4 multiplayer mode [2][3] The modes for multi-player include:

For gameplay, the Riders have 2 forms of power-ups: Skill and Evolution. Skill changes some Riders' form into their Super Form (eq: Ex-Aid changes into Maximum Gamer) or enables their special abilities if they don't have it (eq: Build gains increased jump range from Rabbit Fullbottle).

Filling the Evolution Gauge enables the player's Rider to evolve to their Final Form and enables their Super Rider Arts.

Some actors reprise their role: 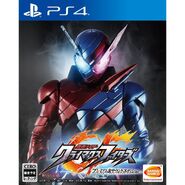 Retrieved from "https://kamenrider.fandom.com/wiki/Kamen_Rider:_Climax_Fighters?oldid=619216"
Community content is available under CC-BY-SA unless otherwise noted.