Action role-playing game
Beat them up

The game's story mode is heavily based upon the movies opposed to their main narratives, featuring all the Heisei-era Riders up until Gaim. Due to the special nature of the story mode, the protagonists fight against their respective movie villains.

A special ‘Sound Edition’ of the game was released simultaneously with the standard edition, featuring special music tracks.

A sequel was released in 2016 to celebrate the franchise's 45th anniversary.

These characters are new to the Battride War series.

Most of the playable and ally characters will battle against some of their doppelgangers.

One of these bosses (save for A.R. Kuuga), except for Albino Joker only appear in special mission mode. Albino Joker appears in other missions, due to the game retelling the events of Missing Ace.

These characters help the playable Riders in battles. Some of them can be chosen as an Assist Character that can be summoned anytime during the game but are not directly playable.

The following characters with a name are voiced by their original actors from the shows and movies.

Most of the Kamen Rider movie-inspired stages are featured from:

Several new songs have been confirmed for this game, including:

All of the main Riders of the Heisei Era in various final, Super, and Other Final Forms 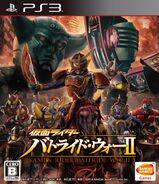 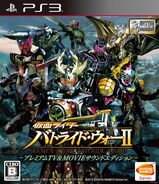 Wii U Box Art
Add a photo to this gallery

Retrieved from "https://kamenrider.fandom.com/wiki/Kamen_Rider:_Battride_War_II?oldid=619214"
Community content is available under CC-BY-SA unless otherwise noted.