Earth (World of Blade (originally), World of Ryuki)
World within the Magic Stone (only Wizard)

Kamata is actually the Paradoxa Undead (パラドキサアンデッド, Paradokisa Andeddo), a Category King Undead who was brought into Ryuki's World by Narutaki. Assuming the guise of sub-chief editor of the Atashi Journal appeared to support Tsukasa and company in their investigation the scene of chief editor Reiko Momoi's murder to clear Natsumi Hikari, helping provide whatever info he could before he and Tsukasa are summoned to join the Kamen Rider Trial in the Mirror World. When Imperer interferes in the fight, Abyss decides to take advantage of this turn of events to see Decade's abilities, overseeing the later fight between Decade and Knight before attempting to take them and Ryuki out. But once Ren acquires the Time Vent from Odin, Shinji uses it so he and Tsukasa can stop Reiko's murder, learning that Kamata is the culprit, using his Undead powers to kill Reiko. After being defeated by Decade and Ryuki, with his deck shattered, Kamata's true nature as an Undead is revealed by Narutaki who takes him back to his home: Blade's World.「Battle Trial: Ryuki World」 「Super Trick of the Real Criminal」

Kamata returns to the World of Blade where he works with Hajime in a plot to take over the world as the chairman of the BOARD Corporation. Kamata arrives and attacks them as the Paradoxa Undead. As Decade battles the Paradoxa Undead with the Capricorn Undead backing him up, Kazuma becomes Blade and fights Garren and Leangle. However, both fights are interrupted with the appearance of Kamen Rider Chalice, who takes the Blay Buckle off of Kazuma and takes out the other Riders before fighting Decade one-on-one. Decade continues his fight with Chalice, with Garren losing his Garren Buckle in the process. The fight comes to a sudden halt when Kamen Rider Todoroki shows up. Back at BOARD, Hishigata is demoted to Rank 3 while Kazuma is fired from BOARD,later Kazuma and Yusuke arrive too late to save Hishigata and Mutsuki as Hajime uses the created card from the Rider Systems to become the Joker, revealing his reasons to Kazuma. Decade arrives as Ryuki with the Blay Buckle and gives Kazuma the resolve to fight back. Once Kazuma becomes Blade, he and Decade destroy the two Undead together. 「Welcome to the Blade Restaurant」 「Blade Blade」

In the World of the Rider War, a copy of the Paradoxa Undead was created by Super Apollogeist by combining Undead. This Paradoxa Undead is destroyed by Kiva. 「Destroyer of Worlds」

A mishap caused by the Greeed Ankh unintentionally altered the timeline which enabled Shocker to utilize the Core Medal to create the Shocker Greeed which defeated the Double Riders and seemingly erased the legacy of the Kamen Riders from history. In 2011, after Kamen Rider New Den-O's attempt to repair the damage, he along with Kamen Rider OOO and M-Ankh awaited execution. However, it was revealed the Double Riders had their brainwashing removed by a Shocker scientist,Paradoxa Undead and other monsters and Kamen Riders come back,later he is seen among Tiger Orphnoch fighting Decade.

It was among the monsters whom were destroyed by a combination of Blade's Lightning Slash, OOO's OOO Bash and Agito's Rider Kick. 「Neverending Story」

Kamen Rider Abyss and Paradoxa Undead appears as a playable character with the other Heisei and Showa kamen Riders in Kamen Rider Riderbout. 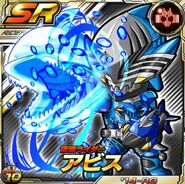 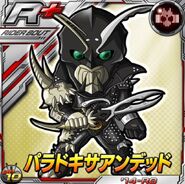 Kamen Rider Abyss appears as a playable character with other Riders and monsters in Kamen Rider Break Joker.

Kamen Rider Abyss as a playable character in this trading card game with other Kamen Rider Kamen Rider Heisei-Era , Showa-Era,super sentai, Metal Heroes and other Heroes.

Kamata can transform into Kamen Rider Abyss using his Advent Deck and V Buckle upon forming a contract with Abysslasher. Abyss also has an additional contract with Abysshammer. His Visor, the Abyssvisor (アビスバイザー, Abisu Baizā), is mounted on his left arm. Abyss' punching power, kicking power, and running speed are identical to Raia's, while his jump height is lower.

Through the use of his Sword Vent Advent Card, Abyss can arm himself with the Abyss Saber (アビスセイバー, Abisu Seibā), Abysslasher's pair of swords. His Strike Vent arms him with the Abyss Claw (アビスクロー, Abisu Kurō), a gauntlet capable of firing high-pressure streams of water Abyss Smash (アビススマッシュ, Abisu Sumasshu) that is derived from Abysslasher's head.

The Paradoxa Undead is the King of Hearts Undead. He is able to create a blade-like wind from his forearm to kill his target.