Tomoaki Maeno
The Kamakiri Yummy (カマキリヤミー, Kamakiri Yamī) is a mantis Yummy created by Uva via a Kamakiri Cell Medal, formed from a woman's (portrayed by Maaya Natsuno) desire to have a particular necklace in a jewelry store, resulting in the Shiro Yummy eating all of the jewelry in the store before assuming his current form. The power he gets from the Cell Medal enables him to form several scythe-like energy projectiles to attack with. Uva tasks him with finding Ankh and retrieving the Greeed's stolen Core Medals. While he locates him and overpowers the incomplete Greeed with ease, Eiji intervenes and prevents him from finishing Ankh off. In return, Ankh grants Eiji the ability to become Kamen Rider OOO and fight back. During the ensuing fight against Tatoba Combo, Ankh gives Kamen Rider OOO the Kamakiri Core Medal and to transform into Takakiriba. In this new form, Kamen Rider OOO destroys the Kamakiri Yummy with his Kamakiriswords.

A second Kamakiri Yummy appeared in Movie War Mega Max from a Foundation X member to fight against Kamen Rider Joker. It was destroyed by his Rider Punch.

that came to back up Kamen Rider Beast. It was attacked by Kamen Rider Amazon, who used his Jaguar Shock on it. Kamen Rider × Super Sentai × Space Sheriff: Super Hero Taisen Z

A revived Kamakiri Yummy was one of the various past monsters part of the army of Bujin Gaim in the Sengoku Period world of the Bujin Riders. He is destroyed along with Cancer Zodiarts, Pisces Zodiarts, and Phantom Khepri by Armored Rider Ryugen W Arms' Rider Shooting. Kamen Rider × Kamen Rider Gaim & Wizard: The Fateful Sengoku Movie Battle 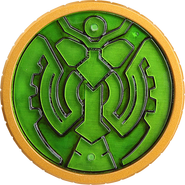 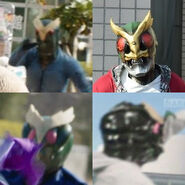