In this special, time passes, and Junichi Shimura eventually joins BOARD, which is now operated by Sakuya Tachibana. He takes up the role of Kamen Rider Glaive, being the new Blade. He is armed with the Glaive Rouzer, a modified version of the Blay Rouzer. He appears hidden in the bushes when Natsumi Miwa is persecuted by Peacock Undead.

Kamen Rider Glaive appears watching to Natsumi Miwa and Shin Magaki is chased by Peacock Undead, he was walking while waiting for the perfect time to help them.

Natsumi and Shin continue running from the Undead. Natsumi finds a steel pipe and tries to get Shin to cover her escape, claiming that men are supposed to protect women. This fails and the Undead continues chasing them until an explosion destroys it. The mysterious figure approaches them, no longer hiding and throws them both Change Kerberos Rouse Cards. He returns back to his human form.

Junichi offers them both to be Kamen Riders. He also explains that the incident with the Undead ended once, but the power of the Kamen Riders is needed again. Natsumi and Shin refuse and give back the cards. Junichi says to himself that they will return and that it is their fate is to become Riders. Behind Junichi is Kazuma Kenzaki, who becomes a garbageman.

In the movie, like Hajime Aikawa, he is a Joker-class Undead with a white and pink color scheme, as opposed to Aikawa's black and green colors - thus the Albino Joker name. When the previous fight ended with Kenzaki sealing Hajime, he rose out of the shadows. The first step in his plan was to release all of the Undead again by forcefully taking the Rouse Cards from Kei Karasuma. When all the Undead are sealed, he kills his own subordinates and disguises himself as Shin to fool the other riders, but Shiori figures out Shimura's plan and he is exposed. His plan is to obtain the power of Jashin 14 using the Vanity Card, his main target is Amane Kurihara because it's revealed that her father entered the location of Jashin 14, so only one of his blood can be sacrificed. During the fight with the Albiroachi, Kenzaki tells Mutsuki to unseal Hajime, which he does. With Hajime released, he goes out and protects Amane, taking her to safety. Shimura catches up with them and Hajime transforms into the Black Joker to fight Shimura; unfortunately, still exhausted after being unsealed, Shimura defeats him. In some magazines, there are shots of the Albino Joker wielding a red scythe at the location of this scene; however, this weapon was never seen in the movie. Although Black Joker is the most powerful of all possible Jokers, the Black Joker is extremely exhausted and therefore is defeated.

He then uses the Category King cards to create the Vanity Card and seals Amane in it. He then goes on to revive Jashin 14 by inserting it into an ancient tablet, fusing with the beast to obtain its power. He then appears to the Riders in his new form and attempts to kill them. Hajime concocts a plan to free Amane and stop Shimura: to trade places with Amane. Hajime tells Kenzaki to destroy the tablet. Kenzaki hesitates knowing he'll kill Hajime, but Hajime convinces him and destroys it, weakening Shimura. Kenzaki then changes into King Form and uses his Royal Straightflash attack to split Jashin, thus Shimura dies in the explosion that insured from the monster's death.

Kamen Rider Glaive appears with other Kamen Riders commanded by Wataru Kurenai, but all are murdered by Decade in episode 1 of Kamen Rider Decade in the dream of Natsumi Hikari and then conclude the dream with Decade as the only Rider in the Rider War Rider War

In the special version of episode 31, Kamen Rider Glaive is seen as one of the many Kamen Riders who fought in the Rider War against Decade and were all destroyed. They were presumably restored after the destruction (and subsequent revival) of Decade at the end of the Rider War and the worlds were restored. The Destroyer of Worlds

Kamen Rider Rider Glaive make an appearance with other Riders and kaijin monsters when Shinnosuke and Kiriko discover the knock-off versions of the Televi-Kun, an abandoned warehouse after they meet Roidmude 027

Kamen Rider Glaive is a playable character with the other Heisei and Showa Kamen Riders in Kamen Rider Battle Ganbaride.

Kamen Rider Glaive , Albino Joker and Jashin-14 appears as a playable character with the other Heisei and Showa kamen Riders in Kamen Rider Riderbout. 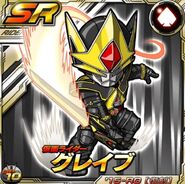 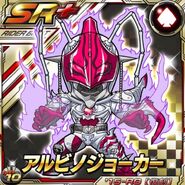 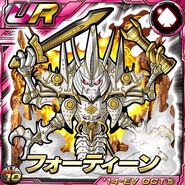 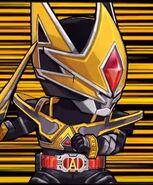 Kamen Rider Glaive appears as a playable character in this trading card game with other Kamen Rider Kamen Rider Heisei-Era , Showa-Era,super sentai,Metal Heroes and other Heroes.

The Albino Joker (アルビノジョーカー, Arubino Jōkā) is Shimura's true form. A second Joker that rose to power after Hajime was sealed in the movie, he strives to create the Vanity Card using the power of all four Category King Rouse Cards. One of the most fearsome powers of the Albino Joker is that, even without having won the Battle Fight, (although he may technically have, considering Hajime was sealed away), he is able to generate an army of Albiroachi without the help of the Sealing Slab.

Unlike his counterpart Black Joker, Albino Joker has a lot of abilities, making him the most powerful Undead.

This form is exclusive to Missing Ace.

After using the Vanity Card to seal Amane into the slab as a sacrifice, the Albino Joker is granted control over Jashin-14, an ancient creature that is nigh-indestructible. He is easily able to swat away attacks by all four of the Riders, even with Garren and Blade using their Jack Forms. However, after Hajime replaces Amane as the sacrifice then makes Blade destroy him, this form is severely weakened, and the Riders are able to attack him at last, until both Jashin and the Albino Joker are destroyed by Blade's Royal Straightflash.

This form is exclusive to Missing Ace.