Jungle OOO (ジャングルオーズ, Janguru Ōzu) is a video game based on Kamen Rider OOO. It also serves as the basis for the Jungle OOO Gashat.

Jungle OOO was developed as part of a series of Heisei Rider Gashats by Genm Corp.. As part of CEO Kuroto Dan's ambition to gather the power of the legends preceeding his own Kamen Riders, they contributed to the completion of his Kamen Rider Battle: Ganbarizing.

A manifestation of Kamen Rider OOO (仮面ライダーＯＯＯ（オーズ）, Kamen Raidā Ōzu) was summoned along with Double and Fourze from the Game Area generated by the Ganbarizing Gashat which had been installed into a Collabos Bugster by Kamen Rider Genm who, as Emu Hojo noted, controlled them like game characters. Advancing on Emu, the three Riders were held off by the sudden arrival of "Dr. Pac-Man", 「Part. I: Legend Rider Stage」 who fired at them with his Gashacon Bugvisor to cover his escape with Emu. Catching up with Emu and "Dr. Pac-Man" now joined by Hiiro Kagami and Taiga Hanaya, Genm's Riders met the three doctor Kamen Riders in a skirmish while Genm himself pursued "Dr. Pac-Man", with OOO engaging Snipe Shooting Gamer before facing Brave Famista Quest Gamer in a Game Area generated when the doctors used the Bandai Namco Gashats provided to them by "Dr. Pac-Man". Acting as a batter supported by a team of Bugster Viruses, OOO was outmatched by the pitcher Kamen Rider Brave who ultimately defeated him and his team with Famista's Critical Strike. 「Part. II: Legend Gamer Stage」

OOO later appeared as part of a gathering of the first seventeen Heisei Riders which empowered Genm as he performed the Ganbarizing Critical Strike, defeating the three Riders with one Rider Kick. Returning to his lair, Dan announced to Parado, who had taken the guise of Dr. Pac-Man, that everything was proceeding according to plan as his assembly of Gashats was completed. 「Part. III: Final Legend Stage」 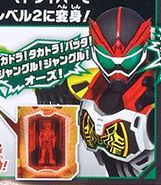