In 2019, a mysterious person restarted the Mirror World Battle Fight. At the same time, Jun and other Mirror World Riders regained their memories and ability to transform. Jun was later seen transforming alongside Ishihashi and Tozuka, the new users of the Scissors and Tiger Card Deck. The gang was opposed to Miyuki Tezuka's gang, which consisted of Shinji Kido, Kimura, and Ishida. They encountered one another at an abandoned house.

A huge battle broke out. Jun and his gang retreated when they were assaulted by a horde of Mirror Monsters. He would later have a discussion offscreen with Miyuki Tezuka, with Tezuka wanting the two sides to team up for a better chance of survival. Unfortunately, Tezuka betrayed his team and sided with Jun, resulting in Shinji, Kimura, and Ishida being cornered and helpless. Ishida would later be killed by Tezuka's Evildiver. As Jun and the others were preparing to finish off Shinji and Kimura, Kamen Rider Ouja appeared and used his Final Vent on one of Jun's comrades: Tozuka, killing him. Gai fought Ouja for a brief while before Ouja turned his attention to Shinji Kido. 「Advent Again」

He, along with Miyuki Tezuka and Ishihashi was celebrating their victory with barbeque. However, Tezuka immediately betrayed Ishihashi by stabbing him with a table knife, with Jun following right after. It would also be revealed that he was in love with Tezuka and they appeared to be in a romantic relationship together.

However, it was short lived as the latter eventually betrayed him after being provoked by Dark Shinji. Jun and Tezuka later fought, with Jun becoming the victor. However, a dying Tezuka managed to flee. Jun wandered about and called for Tezuka in distraught, rambling about accepting his "love". Unfortunately, Jun ended up fighting Dark Shinji, who said Tezuka died and he would "love" Jun in Tezuka's place instead. Ryuga's Final Vent put an end to his life. Ryuga stomped on Jun's body as he disintegrated, much to the horror of Ren and Kimura.「Another Alternative」

After Sougo resets the timeline, his fate is left unknown, but it's presumed that his death was reversed just like the others. 「2019: Apocalypse」 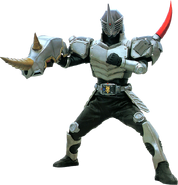 Jun can transform into Kamen Rider Gai using his Card Deck and V Buckle upon forming a contract with Metalgelas. His Visor, the Metalvisor (メタルバイザー, Metaru Baizā), is mounted in his left shoulder. Gai's punching power and kicking power are identical to Zolda's, while his jump height and running speed are higher. However, his jump height is still overall poor in comparison to the rest of the 13 Riders.

Through the use of his Strike Vent Advent Card, Gai can arm himself with the Metalhorn (メタルホーン, Metaru Hōn), a gauntlet derived from Metalgelas' head.