﻿Jun Kadowaki (門脇 純, Kadowaki Jun) is a young man who is also known as Kamen Rider Gaia (仮面ライダーガイア, Kamen Raidā Gaia). He is the main protagonist of Kamen Rider Eve -Masked Rider Gaia- and was supposed to be the original Shocker Hopper cyborg until he was put into further stasis and was not awakened until the 21st century. When he first appeared, he was more of a grasshopper monster, but later became more similar to the Double Riders while still appearing more organic.

Jun Kadowaki was used by Shocker to become the original Hopper series cyborg but their plans changed after Takeshi Hongo escaped. When the Double Riders destroyed the Shocker base before Kadowaki could be awakened he was buried under the rubble for 30 years. Awakening in the 21st century, Kadowaki has no memories of his past and begins his quest to regain his memories while trying to figure out who turned him into a cyborg. Along the way he encounters the remaining Shocker Kaijin while changing from a kaijin to Kamen Rider Gaia.

Jun regains his memories over the course of the story. He was originally a high school student who lived with his father Junichiro Kadowaki and was part of the kendo club. Over the course of the series, Jun would have continuous mental encounters with the Great Leader of Shocker. With help from his now altered human father and Takeshi Hongo, the stone that gave Jun his powers was removed. The Showa Era Kamen Riders up to ZX then put some of their powers into Jun in the form of the Rider Syndrome to keep him alive and give him a new form. Jun as the newly reformed Kamen Rider Gaia would fight against the Great Leader and after a hard battle defeats him with a Rider Kick but is consumed in an explosion. His current wherabouts are unknown.

Unlike the other riders of his generation, Gaia was given powers over nature with abilities to control weather, plants, and fire. It is later revealed that 'Gaia' is a special type of modified human based on the guidelines of the Great Leader. The source of Kamen Rider Gaia's powers is a stone that is attached to Gaia's belt buckle, without it Jun's body cannot be maintained; it also gives him a telepathic link to the Great Leader. The stone was eventually removed to keep the Great Leader out of Jun's mind. Kamen Riders #1-ZX put some of their power into a condition known as the Kamen Rider Syndrome that changed Gaia into a form similar to #1. After gaining this form, Jun becomes less vicious and more heroic.

Machine Crusader is Kamen Rider Gaia's Rider Machine. It is similar in appearance to #1 and #2's Cyclones but the front wheel is rotational and possesses blades that can cut through obstacles and be used to attack enemies. The vehicle is also capable of going over most terrains. The back end possesses a smoke screen for easy getaways.

Jun, Gaiborg, Gaia and Rider 1&2 were showed on the novel cover. 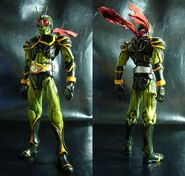 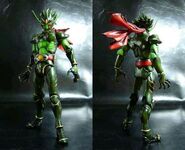 Detailed fan-made figurine of Gaiborg Form
Add a photo to this gallery
Retrieved from "https://kamenrider.fandom.com/wiki/Jun_Kadowaki?oldid=590600"
Community content is available under CC-BY-SA unless otherwise noted.