The Joker Undead (ジョーカーアンデッド, Jōkā Andeddo), or simply Joker (ジョーカー, Jōkā), is an Undead monster featured in the Kamen Rider Blade series. Within the series canon, the Joker is an addition Undead to the standard four suits (clubs, diamonds, hearts, and spades) and is known as the 53rd Existence (５３番目の存在, Gojūsanbanme no Sonzai). Within the contest of the Battle Fight, the Joker functions as a wild card and possesses the ability to mimic the form of any sealed Undead using their Rouse Cards in conjunction with the Chalice Rouzer. According the rules of the Battle Fight, should the Joker survive as the last unsealed Undead, the Stone of Sealing will terminate all lifeforms on the planet using the Darkroachi and begin the contest anew.

This is the original Joker of the Battle Fight and the true identity of Hajime Aikawa. This form is occasionally referred to as the Black Joker (ブラックジョーカー, Burakku Jōkā), and is the only Undead without an affiliating species. During the climax of Kamen Rider Blade, Hajime is the last Undead remaining by the end of the Battle Fight, but Kazuma's sacrifice prevented complete annihilation without sealing him.

In Missing Ace, he was initially sealed by Blade and remained so in the four-year timeskip. After being unsealed by Leangle to protect Amane from Glaive's assault, Hajime chose to sacrifice himself in order to make Jashin 14 vulnerable for the others to attack, it is unlikely he died however, considering Undead can't be killed. In the series Kenzaki became a Joker to put the Battle Fight at a stalemate, thereby ending it without sealing Hajime. However, this causes both Kenzaki and Hajime to not meet each other again. Since, they will be forced to fight until either one is dead, as they are now rivals.

This is Kazuma Kenzaki's Undead form. In the finale of the Kamen Rider Blade television series, Kazuma mutates into a Joker Undead using his King Form to save Hajime and prevent the termination of all lifeforms on the planet by the Stone of Sealing and the Darkroachi. While Kazuma never transforms into his Joker Undead form, he produces a Chalice Rouzer and has been shown to bleed green blood following his transition into an Undead.

Concerning the details of his Undead physical characteristics, various Kamen Rider Blade-related media has presented different interpretations of his Joker form. According to description from the S.I.C. Hero Saga story, "Day After Tomorrow", Kazuma's Joker form is physically identical to Hajime's and is named Joker (Kazuma Kenzaki ver.) (ジョーカー (剣崎一真ver.),, Jōkā (Kenzaki Kazuma ver.)). This story depicts him wielding a double-edged sword similar to the one used by the Caucasus Undead. The Kamen Rider Blade novel, however, describes his Joker form resembling the Beetle and Caucasus Undeads. To this date, the Toei Company has yet to release any official statement or rendition regarding the description of Kazuma's Joker form.

Despite not appearing on-screen in Joker Undead form, Kazuma's canonical status as an Undead has been confirmed and featured across other Kamen Rider media franchises, including novels and movies. Dialogue between Kazuma and Kuroto Dan during the events of Kamen Sentai Gorider, offers further details concerning the nature of Kazuma's Joker abilities. Kazuma himself explains that his existence as a Joker Undead subjects any world he occupies to the rules of the Battle Fight and any world bereft of Undead will be targeted for destruction upon his arrival, including Kuroto's Game World. Maze 3: Gorider Forever

The Albino Joker (アルビノジョーカー, Arubino Jōkā) was the feature monster of the Kamen Rider Blade: Missing Ace movie which explores an different continuity than the events of the Kamen Rider Blade television series finale. In this timeline, Kazuma seals Hajime, but in his wake, the Albino Joker emerges. This Joker Undead is the mirrored version of the Black Joker Undead, colored white with pink accents. Attacking Prof. Karasuma, the Undead monster released the sealed Undead from the Rouse Cards in possession of BOARD. In an elaborate scheme, the Albino Joker assumed the identity of Junichi Shimura and infiltrated the BOARD organization becoming Kamen Rider Glaive. Taking advantage of their resources, "Junichi" collects the 4 King Category Cards and abducts Amane Kurihara for a ritual to summon Jashin 14. The full extent of its plan involved merging with the creature to acquire its power. Though it succeeds in its plan, the Albino Joker was thwarted by the combined efforts of Kamen Rider Chalice and Kamen Rider Blade and it's currently unknown whether it was sealed or destroyed alongside Jashin 14 following its defeat. While active, it was responsible for the deaths of multiple individuals including Shin Magaki and Natsumi Miwa.

Many details concerning the Albino Joker, including the origins and personal history, were never explored in the movie and still remains unknown to this date.

Joker reappeared in Kamen Rider Decade in the World of Blade as the final evolution of BOARD CEO Hajime Shijyo. Hajime stole the Garren and Leangle Buckles, and used the life forces of Hishigata and Mutsuki to complete the Joker Rouse card, which he used as Chalice to transform himself into the Joker Undead. After assuming the Joker's form, however, he was destroyed by Blade Blade (as a Final Form Ride) and Decade.

In Kamen Rider × Super Sentai: Super Hero Taisen, Joker is one of the monsters ressurected by Doktor G and becomes one of Dai-Shocker's Great Commanders. He takes on the Gokaiger

successfully alongside other commanders. In the final battle, Joker is seen for the last time facing Red1

Although his human identity isn't named, the fact that he is one of Dai-Shockers resurrected monsters means that he must be Hajime Shijyo, who was actually destroyed in the past. 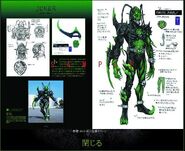 Joker concept art
Add a photo to this gallery

Retrieved from "https://kamenrider.fandom.com/wiki/Joker_Undead?oldid=679093"
Community content is available under CC-BY-SA unless otherwise noted.