Jiro (次狼, Jirō) is the human form of the violent and impulsive Garulu (ガルル, Garuru), the strongest and last surviving member of the Wolfen Race (ウルフェン族, Urufen Zoku) that were decimated by Rook in one of his Time Plays. He is also one of the IXA Belt users in 1986.

In the human guise of Jiro, Garulu sees the world as a place of utter corruption and usually prefers to be with Castle Doran as its lead caretaker. In 1986, Jiro is a regular at the Café mald'amour and attacked regulars in secret to feed on them. Recognizing Yuri as an "ideal wife" to revive the Wolfen Race through, Jiro joins the Fangire Hunters to get revenge on them and becomes the first user of the Ixa System, saving Yuri Aso from the Earwig Fangire and also alerting Otoya Kurenai to his true nature, with the two at odds with each other unless Yuri's in any danger. But after Yuri revealed that her heart was for Otoya, Jiro left a lost man after exposing himself for what he truly was and attempts to get his revenge on Rook. But after the attempt, Jiro was forced to ask for Otoya's help, with them, Ramon, Riki, and Yuri defeating a weakened Rook together.

Jiro, Ramon and Riki would soon encounter the Fangire King who easily defeats them. Fortunately for them, all three manages to escape his clutches. After unsuccessfully trying to kidnap Maya to act as a shield for them, the Fangire king appears in front of them again as he soundly beats all three once more. The Fangire King then offers them a choice between getting killed or killing Otoya themselves. After trying and finding themselves unwilling to kill Otoya (as per the King's offer), Jiro, Ramon and Riki decides to leave town.

However, Jiro comes back to unsuccessfully aid Otoya and Maya against Dark Kiva and gets sealed into the Garulu Saber for his efforts. He manages to escape imprisonment along with the other Arms Monsters because of Otoya and runs away after seeing Otoya and King fighting. In the fight's aftermath, before deciding to lead the Arms Monsters in keeping Castle Doran from running amok, Jiro questions Otoya's faith in them when Otoya suddenly appears to ask that he and the others protect Wataru in his stead. Though acting cynical, Jiro silently nods to Otoya as he sees that his friend passed over. This leads to Jiro now aiding Wataru in 2008, his Garulu Saber form used by Kiva to assume Garulu Form. Out of the Arms Monsters, Jiro supports his current condition as Wataru's ally most as a token of respect for Otoya, even to the point of sometimes getting directly involved to honor his vows.

Jiro and the other Arms Monsters are in 1932. Urataros possesses Jiro as Ramon/Ryutaros hogs the rice.

In the The Queen of the Castle in the Demon World net spin-off movies, Jiro challenges Wataru to a card game when he accidentally ends up in Castle Doran, losing to him in Hell's Old Maid and suffers a humiliating punishment. He later tracks down Wataru to get back at him, finding Shizuka before she overwhelms his nose with an old fish and manhandles him for threatening Wataru.

In the novel reimagination of the TV series, Jiro/Garulu is a Fangire Hunter, while Bassha and Dogga, as well as Kivat do not exist in this story, as Kiva is Wataru's Fangire form.

At first, Jiro was not much different from most of the Fangires that preyed on humans. He did, however find himself having an interest in Yuri and Susan Kumiko. He also likes coffee apparently. Although Jiro originally disliked Otoya and saw him as pathetic, he soon came to befriend and respect him when he saw all that Otoya has done for him and others. It seems that being with Otoya has changed Jiro for the better as he seemingly stopped killing humans as well as Otoya himself even when he was threatened by the Fangire King. After promising Otoya to take care of Wataru, Jiro developed a more serious attitude while helping Wataru become a better man. He does however, still have a comical side as he cried and somewhat freaked out at Keisuke and Megumi's wedding.

The IXA system, an acronym for Intercept X Attacker, is a Rider System developed for fighting Fangire. Otoya uses the Prototype Version of the Ixa System, which only has access to Save Mode (セーブモード, Sēbu Mōdo).

In 1986, the Ixa System was still in development. There were several technical problems such as the armor shooting out steam, a constant beeping, and the Ixa Knuckle producing sparks when activating a Fuestle. In addition, Ixa only has access to the Knuckle Fuestle. In contrast to the 2008 versions, the Ixa Knuckle had a deeper tone of voice and uses a bronze projection for the Ixa System's transformation. The Ixa Prototype Version exhausts a qualified person's body considerably even if they are not human, as the System still managed to harm both Jiro and Rook. Prolonged usage of the IXA system caused Otoya to develop temporary amnesia.

By inserting the Knuckle Fuestle into the Ixa Belt and pressing the Ixa Knuckle, Ixa can perform the Broken Fang (ブロウクン・ファング, Burōkun Fangu) finisher.

Kamen Rider Ixa is composed of the following parts:

Garulu is Jiro's monstrous true form. He is a member of the Wolfen Demon Race. When he shifts to his true form, he gains superhuman strength, agility, razor-sharp claws. Like the Fangire, Jiro (and the other Wolfen for that matter) initially fed on life force. He may have have stopped consuming human life energy after befriending Otoya and the others though. But once he went into the service of Wataru, he is sustained by the life energy consumed by Castle Doran. When he was confronted by the King in 1986, his Wolfen form was sealed into the Garulu Saber . Although he was later unsealed during the battle with the Fangire King, it was shown that he can still assume the form to assist Wataru (and presumably Masao).

As the survivor of the Wolfen Race, Jiro has heightened senses and uses his claws to rip out human souls from their bodies before eating them. He can assume his Garulu Form by scratching the floor, generating blue sparks. In Garulu Form, Jiro can move at incredible speeds as well as survive being attacked by members of the Checkmate Four. He along with the other Arm Monsters can also lend their powers to Kiva and presumably New Kiva through Fuestles. This is to the point where they can combine their powers at once to assume DoGaBaKi Form and DoGaBaKi Emperor Form. It was hinted that he also became stronger in 2008 as he along with his companions faced multiple revived Fangires.

The Demon-Beast Sword Garulu Saber (魔獣剣 ガルルセイバー, Majūken Garuru Seibā) is a weapon that Garulu assumes for Kiva to change into Garulu Form. Though in a statuette form when summoned, the Garulu Saber assumes a Kris form once in Kiva's hand. One of its abilities is to fire a shockwave named Howling Shock (ハウリングショック, Hauringu Shokku) from the hilt. The Garulu Saber can be use for the finishing attack Garulu Howling Slash (ガルル・ハウリングスラッシュ, Garuru Hauringu Surasshu). This is done by first having Kivat perform a Garulu Bite (ガルルバイト, Garuru Baito) on the blade of the Garulu Saber after which Kiva holsters, by way of "biting", the weapon in his mouth as he charges at the Fangire, jumping in the air to slash the Fangire into two as he lands in front of it. [2]

Due to the Garulu Fake Fuestle tracing Garulu's frequency, the Garulu Saber can be used by Ixa. Although it does not cause Ixa to change into a new form as Kiva does, it retains its power and effect regardless. Ixa is capable of doing this with the Bashaa Magnum and Dogga Hammer as well, though it was not shown in the series' run.

The Garulu Saber consists of the following parts:

There are three Fuestles (フエッスル, Fuessuru) in the possession of Kamen Riders Kiva, Ixa and Dark Kiva respectively, which allow access to Garulu's power. 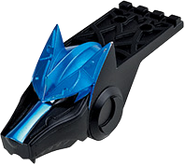 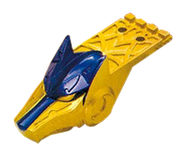 The power Garulu lends Kiva is harnessed in the Kiva Garulu (キバガルル, Kiba Garuru) Form Ride Card (フォームライドカード, Fōmu Raido Kādo), which is used by Decade to transform into Kamen Rider Kiva Garulu Form. Unlike Kiva himself, who is left-handed in this form, Tsukasa prefers his right hand. This card is first used in the World of Ryuki to fight Kamen Rider Knight 「Battle Trial: Ryuki World」 and again in the World of Agito to fight Kamen Rider Exceed Gills. 「Reunion: Project Agito」

While "garuru" (ガルル, "garuru") is a Japanese onomatopoeic sound representation of a wolf's howl, the last syllable in Jiro's name contains the kanji for "wolf" (狼, ōkami/rō).