The Jimber Arms (ジンバーアームズ, Jinbā Āmuzu) are upgraded, jinbaori-themed versions of a default form of Armored Riders. Accessed through attaching a Genesis Core to the left side of a Sengoku Driver to use an Energy Lockseed alongside a normal Lockseed, the Riders in Jimber forms wear different helmets with different visors. While it is mostly used by Armored Rider Gaim, it can also be used by other Riders, provided that the latter has a Genesis Core Unit. Each Jimber form seems to give a special power depending on the Energy Lockseed used: Lemon gives strength, Cherry gives speed, and Peach gives heightened senses; those of other Jimber forms are either unclear or unknown.

Despite the Jimber Arms’ unique abilities, it was touted as a weaker form due to being derived from the weaker, incomplete "Core Slot" prototype. However, users like Kouta Kazuraba managed to defeat Sigurd, Marika, and was trading blows evenly with Zangetsu Shin and the creator of the Genesis Driver, Duke, on different occasions.

DJ Sagara provided a Lemon Energy Lockseed and Genesis Core to Armored Rider Gaim, Kouta Kazuraba. The Man Who Developed the Belts The Armored Rider, however, could not work out how to use this gift with his own Sengoku Driver until a confrontation with a Lion Inves which knocked the Rider Indicator off the Sengoku Driver. Kouta quickly realized that he could insert the Genesis Core into the gap left by the Rider Indicator, and activated the Lemon Energy Lockseed in tandem with the Orange Lockseed to first assume Jimber Lemon Arms. Wielding a Sonic Arrow of the New Generation Riders, Gaim easily destroyed with the power of both Lockseeds. The New Arms! Jimber Lemon is Born!

Protecting the combined Beat Riders' dance event, Gaim assumed Jimber Lemon to defeat Bravo again when he attempted to intervene. Soon after, however, Gaim was confronted by New Generation Rider Duke Lemon Energy Arms, who challenged him to a duel. Farewell, Beat Riders Despite using Jimber Lemon, Gaim was easily defeated by the equivalent New Generation Rider, who took his leave having collected useful battle data. Later, in an attempt to break into Yggdrasill Tower via the Helheim Forest, Gaim assumed Jimber Lemon to face New Generation Rider Zangetsu Shin Melon Energy Arms, but was beaten by him as well. The Gifted Secret Weapon

However, Gaim Jimber Lemon would be evenly matched in a confrontation against New Generation Sigurd Cherry Energy Arms. Successfully defeating the Lock Dealer, Gaim took his Cherry Energy Lockseed for himself. Yggdrasill's Secret

In a temporary alliance with Yggdrasill, Gaim assumed Jimber Cherry Arms to fight the Inves in the Helheim Forest alongside Marika. However, Kouta soon broke this truce and, took the opportunity to snatch Yoko's Peach Energy Lockseed after the two Riders canceled their transformations. Soon after, Gaim assumed Jimber Lemon Arms in another confrontation with Zangetsu Shin, only for Takatora to stand down. The Truth of One-Seventh

Testing the power of the Peach Energy Lockseed, Kouta discovered that Jimber Peach Arms granted him the power of enhanced hearing. Kouta soon utilized this ability in an attempt to track down the Over Lord Inves in the Helheim Forest. He was, however, confronted by Sigurd and, after assuming Kachidoki Arms to defeat the Suika Arms units he summoned, appropriately switched to Jimber Cherry Arms to defeat him. Continuing his search, Kouta returned to Jimber Peach Arms and ultimately found a pair of Over Lords, Demushu and Redyue. Despite his attempts to approach them peaceably, Kouta was incapacitated when Redyue exploited his sensitive hearing by producing loud sounds, allowing Demushu to beat him. The New Formidable Enemy: Over Lord

Derived from the Energy Lockseeds, these forms' typical Arms Weapon is the Sonic Arrow. In the case of Jimber Marron, however, the Arms Weapons are the Marron Bombers. 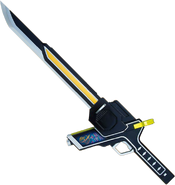 Musou Saber
Add a photo to this gallery

Marron Bombers with the shells removed.
Add a photo to this gallery 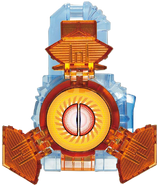 Orange Squash + Lemon Energy
Add a photo to this gallery

Knuckle jumps up and fires the Marron Bombers' spikes at the enemy, shedding off their shells before landing two fiery punches at once.

Knuckle uses an Au Lait function and charges the "peeled" Marron Bombers with flames and delivers an explosive punching attack, the attack will creats a walnut-shaped energy shockwave.

Retrieved from "https://kamenrider.fandom.com/wiki/Jimber_Arms?oldid=627356"
Community content is available under CC-BY-SA unless otherwise noted.