He first appeared when he kills Kamen Rider Hercus via Hyper Clock Up and drops his blue rose at the corpse. One day later, he was sent by ZECT to go aboard on a space station to ensure their secret mission goes as planned.

However Kabuto and Gatack were able to get onto the space station to discover the real plot. Though at first both riders are outmatched by Caucasus due to the Hyper Zecter, Gatack successfully held him off allowing for Kabuto to steal the Hyper Zecter and eject him into space. Kabuto sends Gatack back to the Earth via an escape pod as he was completely exhausted.

But this doesn't stop Caucasus from having his revenge and killing Gatack by smashing the escape pod's window, sucking the contents of the pod into the vacuum of space. But Kabuto had predicted this and uses the Hyper Zecter to go back in time to prevent Gatack's death, and kills Caucasus by kicking him to the missile before it hits the meteor.

Kamen Rider Caucasus appears with other Kamen Riders commanded by Wataru Kurenai, but all are murdered by Decade in episode 1 of Kamen Rider Decade in the dream of Natsumi Hikari. The dream then concludes with Decade as the only Rider in the Rider War. Rider War

Diend appears long enough to summon Kamen Riders Ouja, G3, and Caucasus as wild cards in the fight. The Oni Brothers are able to defeat them until Tsukasa and Sieg arrive, allowing Den-O to assume Wing form as Momotaros possess Tsukasa to fight as Decade. The other Tarōs do the same with Diend's summoned Riders. Caucasus is possessed by Kintaros with the other riders being possessed by Urataros and Ryutaros. Cho Kamen Rider Den-O & Decade Neo Generations: The Onigashima Warship

In the special version of episode 31, Kamen Rider Caucasus is seen as one of the many Kamen Riders who fought in the Rider War against Decade and were all destroyed. They were presumably restored after the destruction (and subsequent revival) of Decade at the end of the Rider War and the worlds were restored.The Destroyer of Worlds

Kamen Rider Caucasus appears as a Toy ,when Sento and Sougo they find Ataru he brings them to his room which is filled with Kamen Riders memorabilia, with Sougo and Sento stunned to see toys of themselves. Ataru reveals that Kamen Riders are fictional.Kamen Rider Heisei Generations FOREVER

Kamen Rider Caucasus appears with Ouja, Leangle, IXA, and Black, cited as examples of the costumes Eitoku used. Later in the beginning of the questionnaire, Kenichi asks which Rider is Jiro referring to, it is finally discovered that it is Black. That One! Jiro Okamoto: Final Blow Diet!!

Kamen Rider Caucasus appears as a playable character with the other Heisei and Showa Kamen Riders in Kamen Rider Riderbout.

Caucasus reappeared in Kamen Rider: Battride War II as a boss, with Worms as mind bosses against Kamen Rider Kabuto and Kamen Rider Gatack. He easily defeats Kamen Rider Gatack. When Caucasus had the opportunity to destroy, the Kabuto Gatack gets in the way with Kabuto stealing his Hyper Zecter and transforming in Hyper Kabuto and destroys Caucasus the first time. Kabuto uses Hyper Clock Up to time travel in the moment when Caucasus killed Gatack, and he later is destroyed by Kabuto Hyper Form Rider Kick by a second time.

Caucasus along with the movie villains 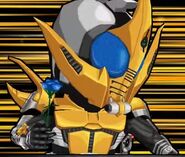 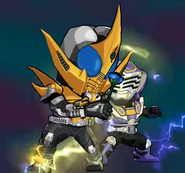 Kamen Rider Caucasus appears as a playable character and Boss among the other villains in Movies or TV series. He appears in his respective event and uses Rider Punch or Hyper Rider Kick against his opponents in Kamen Rider Transcend Heroes.

K-Caucasus
Add a photo to this gallery

Kamen Rider Caucasus transforms using the power of his gold Kabutech Zecter, the Caucasus Zecter. His power easily exceeds the power of all the other Riders.

Though Caucasus was not shown to have a Masked Form on-screen, toy versions of a possible Masked Form for Caucasus and the other two Kabutech Riders was made for the Cast-Off Rider line.

Retrieved from "https://kamenrider.fandom.com/wiki/Issei_Kurosaki?oldid=683547"
Community content is available under CC-BY-SA unless otherwise noted.