As part of Argos' machination, a reincarnated Ikkyu lived among the 100 historical figures in harmony within the Village of Heroes on the Island of Eyecons. Ikkyu was one of the first eight who were hunted down by Dark Ghost as he collected the Ghost Eyecons. Amazing! World's Beginning!

Dark Ghost would assume Ikkyu Damashii himself in his fight against Kamen Rider Ghost, countering Himiko Damashii. Gathering all 100 heroic Eyecons, Argos used them as a sacrifice along with Darwin's power of evolution to convert Takeru Tenkuji's dead body into a vessel for the ultimate Eyecon, the Extremer Driver, which he intended to use to fulfil his ultimate agenda of converting all life on both Earth and the Gamma World into ghosts. Ultimately, however, Takeru was able to gain the strength of the 100 heroes along with his friend's spirits, allowing him to defeat Argos seemingly at the cost of his own existence only for the 100 heroes to use their power to restore his soul.

While the initial fifteen heroic Eyecons returned to Takeru's side, the whereabouts of Ikkyu and the others following the dissolution of the Island of Eyecons is unknown. Kamen Rider Ghost the Movie: The 100 Eyecons and Ghost's Fateful Moment

Ikkyu is among the historical figures who are featured in Stories of the World's Greatest People, the book passed down to Takeru Tenkuji by Ryu Tenkuji. He is acknowledged under The Quick Wit Expert: Ikkyu (とんちの名人 一休, Tonchi no Meijin: Ikkyū).[1]

Ikkyu's entry was ultimately left unseen on-screen, but was among those unveiled by Televi-kun Magazine. 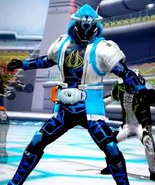 Necrom Ikkyu Damashii
Add a photo to this gallery

Ikkyu Ghost Eyecon
Add a photo to this gallery

Retrieved from "https://kamenrider.fandom.com/wiki/Ikkyu_Damashii?oldid=550135"
Community content is available under CC-BY-SA unless otherwise noted.