Ibuki (イブキ, Ibuki) is a character originating from Kamen Rider Hibiki. In Kamen Rider Decade, in the World of Hibiki, a possible future of the Hibiki lore is seen, where Ibuki also exists. There is also a past Ibuki. All of these three versions are portrayed by Jyoji Shibue.

Ibuki (A.R. World)
Add a photo to this gallery

In this Oni form, Ibuki is a blue demon. This is Ibuki's basic and only form, despite being a member of the head family, Ibuki does not have a second form. To become this form, Ibuki blows into his whistle and air gathers around him like a tornado, causing his body to transform into that of an Oni. Ibuki also gains a second "oni face" which is a crest that forms on his forehead. Unlike most Kamen Riders, Ibuki does not wear a suit, rather his demon form is his true form. 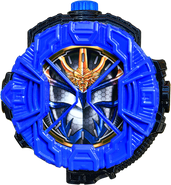 Ibuki Ridewatch
Add a photo to this gallery


Cite error: <ref> tags exist, but no <references/> tag was found
Retrieved from "https://kamenrider.fandom.com/wiki/Ibuki?oldid=609673"
Community content is available under CC-BY-SA unless otherwise noted.