I am the Electric Human Stronger!!

I am the Electric Human Stronger!! (おれは電気人間ストロンガー！！, Ore wa Denki Ningen Sutorongā!!) is the first episode of Kamen Rider Stronger. Unlike previous Kamen Rider Series premieres and indeed the majority of those that would follow, it introduces the protagonist as already a Kamen Rider fighting evil, instead of showing him being thrown into the conflict and becoming a Rider. Stronger and Tackle's origin would be shown in the second episode. 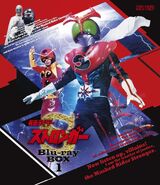 Retrieved from "https://kamenrider.fandom.com/wiki/I_am_the_Electric_Human_Stronger!!?oldid=624381"
Community content is available under CC-BY-SA unless otherwise noted.