I Want to Ride a Bike

I Want to Ride a Bike (自転車に乗りたい, Jitensha ni Noritai) is the fortieth episode of Kamen Rider Wizard. It is the first part of a two-part arc introducing the Gate, Yuzuru Iijima. It also features the return of Mayu Inamori, debuting as Kamen Rider Mage.

While Rinko tries to investigate Fueki, Nitoh starts to teach a boy named Yuzuru to ride a bicycle after he watches Kamen Rider Beast battle a Phantom and his Ghouls with a mountain bike.

Wajima apologizes to Haruto and Koyomi for keeping Fueki secret from them. To learn more about Fueki's intentions, Haruto asks Rinko's help to look for him. Meanwhile, Kosuke meets Shunpei just as a child is attacked by the Phantom Sylphi and borrows his bike to reach him.

The boy watches in awe as Kamen Rider Beast makes use of his bike skills to defeat the Ghouls and after Haruto joins the fray, Sylphi retreats. Introducing himself as Yuzuru Iijima, he asks Kosuke to teach him how to ride a bike, revealing that he intends to to so to make amends with his friend Akari Kurata. He started avoiding her after getting into trouble while riding her bike despite being unable to, but as Akari will move to another city in the next week, thus he must learn before that. Kosuke agrees and starts a long training session to teach Yuzuru while Haruto and Rinko ask for Kizaki's help to look for Fueki.

However, Sylphi hears the entire conversation from afar with his wind powers and makes use of his winds to assist with Yuzuru's training. After spending all the night assembling a composite picture of Fueki with Rinko, Haruto decides to check up on Kosuke while Yuzuru makes a demonstration of his bike skills to Akari while apologizing to her. However, Sylphi uses his powers to create an accident, throwing Yuzuru's bike at Akari and knocking her unconscious.

While keeping Nitoh busy, Sylphi reveals to a grief-stricken Yuzuru that he used his winds to assist him and blames the boy for what happened as he loses all hope and starts turning into a Phantom. Meanwhile, Haruto's way to them is blocked by Medusa who drains all his mana and gains the upper hand until Mayu appears to help him out, transforming herself into a Kamen Rider to confront the creature that her sister became. 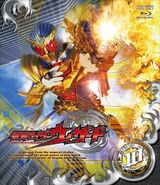 Retrieved from "https://kamenrider.fandom.com/wiki/I_Want_to_Ride_a_Bike?oldid=619098"
Community content is available under CC-BY-SA unless otherwise noted.