Before the series' start, in the twentieth century Kamen Riders had fought against an evil threat where many friends and family members were lost. However, they were defeated by people with powers and enhancements. With their defeat, the Kamen Riders and anyone similar to them were reduced to beings called Hybrid Insectors. Eight years later, the newly named Hybrid Insectors were being hunted down by groups called the Insect Hunters. One member named Akira Sawada joined the group because he lost his father because of a Hybrid Insector. What Akira didn't know is, his father himself was a Hybrid Insector who was killed by an Insect Hunter. Encountering one of the originals Shiro Kazami who defeated an army of clones, Akira puts on a belt and himself becomes a Hybrid Insector. Now wanted by the Insect Hunters, Akira reluctantly joins V3 in the battle to bring Kamen Riders back to their former glory and free them from oppression.

In dojinshi, the Kamen Riders are categorized biologically as "Hybrid Insector" by the government and public. 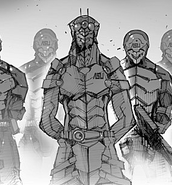 A mass-produced "Hybrid Insector"
Add a photo to this gallery

When Toei found out about the dojinshi and its popularity without their permission they gave out an order to stop the publication. The manga was forced to an abrupt end, but nine chapters are still available in raws and translations online.

On June 11, 2016, however, the authors' twitter announced that the Hybrid Insector will restart later.[1] The tweet implied that they obtained Toei's permission to continue the manga somehow.

Later on August 5, the authors post a manga cover which titled Hybrid Insector: Zero and claimed that the new manga would be put on sale during the 90th Comiket.[2] At the 92nd Comiket (2017), they announced a brand new drawn chapter 1 Hybrid Insector: 01 to their fans and said they will keep renewing this dojinshi series.

Another project was planned by the authors for 2020 at Comiket 98, but due to the COVID-19 crisis, the Japanese government shut down the event to try to contain the pandemic.

Retrieved from "https://kamenrider.fandom.com/wiki/Hybrid_Insector?oldid=619091"
Community content is available under CC-BY-SA unless otherwise noted.