V3 made his appearance riding Hurricane with the Double Riders on their New Cyclone bikes through a dimensional wall, as all the other Kamen Riders marched behind them on foot, when Decade and Diend were at the mercy of the Dai-Shocker army. Kamen Rider Decade: All Riders vs. Dai-Shocker

V3 got on Hurricane, among many other Kamen Riders and their Rider Machines, to perform the All Rider Break attack which ended the final battle with Rock Great Leader. OOO, Den-O, All Riders: Let's Go Kamen Riders

The SD Kamen Rider V3 rides in a modified version of his Hurricane motorcycle in the OVA, Kamen Rider SD: Strange!? Kumo Otoko.

Main article: Hurricane (The Next)

The reboot Kamen Rider V3 rides in a new version of the original Hurricane in the film Kamen Rider The Next.

Just as V3 has his Double Typhoon, Hurricane has a single Typhoon, which changes color to indicate what speed Hurricane is traveling at. 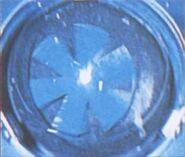 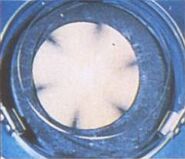 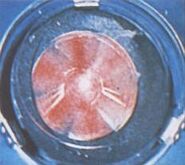 Hurricane's leitmotif was entitled Hashire Hurricane, which served as the ending theme of Kamen Rider V3 from episode 43 to the finale.