How is the Golden Drive Born?

An unusual number of people have suddenly lost consciousness at a hospital and all of the victims are young females who all said something about wanting to be with someone named Sho. However, no trace of Heavy Acceleration has been found. A mysterious patient with no matching record has surfaced and she is identical to Medic, most likely being her copy model. Shinnosuke starts the investigation based on the Sho testimonies.

At a hospital, 18 women, (patients, nurses and doctors) fell victim after they said they wanted to meet Sho and fainted. The Special Investigation Unit investigate and finds that no sign of Heavy Acceleration particles detected. After asking an eyewitness, Rinna reveals that all victims heard a strange noise before they react and she is as well, surprising them. The eyewitness suspects a patient as the culprit, whom revealed to be a woman that Medic copied.

Elsewhere, Medic watches the investigation on the hospital from faraway as the plan comes in. Brain is curious of what she plans but Medic forces him to take care of her pet dog. At the Unit's office, Kyu reveals that in one of the hospital's surveillance camera, the patient was carried by Brain and Medic as well appears. Similarly, the unnamed woman and every victim show the same strange activity in some part of their brains. Meaning, the wave would synchronized to any successful emotional parts to a woman and made them faints. It is possible that their devotion had been targets, making Chase learn another meaning of love from Genpachiro. Shinnosuke and Belt spies Banno in the same tape as Go leaves to find his father. The rest of the team then investigates.

Medic disappoints that her plan goes slowly. Brain protests his cooperation to Medic again and getting turned into a Core as a punishment. Banno appears and forcefully attaches himself to Medic. As Mach arrives, Banno controls Medic and overpowers him but before he can deliver the killing blow, the Super Evolved Heart dashed in and removed Banno from Medic. Medic turns Brain back to normal and orders him to bring her dog away. Chase appears, uneven the odds, forcing Banno to escape. Chase suggest Heart to cooperate in order to defeat Banno but Heart refuses, having known how Chase as Protodrive in the Global Freeze attacking his race until Medic healed them along with a weakened Heart, allowing him to evolve and defeated Protodrive.

At the hospital, Go can't even believe her as a "goddess" to the Roidmudes, since she willingly killed her own kind in the past. As Go leaves to find Banno again, a stranger dashes in and reveals that he had saw the news. He reveals the mysterious woman as Misuzu Hatori, his girlfriend that gone missing since a year prior. The man introduced himself as Kazuya Igarashi, a ballet teacher, thus further cementing Medic's relation to Misuzu. Kazuya however has no idea of whom "Sho" is. 006 offers himself to attack Banno and assures that he will be a part of the Promised Number. Kazuya takes Misuzu to the outside as Chase learns more about romantic love from Shinnosuke. Genpachiro gives Shinnosuke a poster of a ballet dancing performance regarding Misuzu and discovers that both of them disappears from their sight.

Meanwhile, Brain takes Medic's dog on a walk, the dog leads him to Banno, 006 and six other Roidmudes as the two spies Banno killing all seven of them and used 006's homunculus as a main body for his ultimate form: Gold Drive. Deadheat Mach confronts Gold Drive but easily had the Zenrin Shooter and Signal Tomarle hijacked. Medic's dog pee on Brain's shoe, unintentionally exposes his cover as Gold Drive approaches him and asks for his help.

Medic chokes Kazuya and asks him about Misuzu until Drive Type Tridoron frees him. Drive theorizes that Medic wanted Misuzu so that she can evolve using her love emotion. Medic's dog approaches Misuzu, awakening her and simultaneously turns Medic as an open target. Chase was about to kill her but Drive stops him. Cancelling his transformation, Shinnosuke peacefully asks Medic what really happened as she likewise reverted to her human form.

Kamen Rider Drive Volume 11 features episode 41-44: How is the Golden Drive Born?, Where is the Truth About the Goddess?, When Will the Second Global Freeze Start? and Who Loves Heart the Most? [2] Collection 4 comes with 12 episodes. 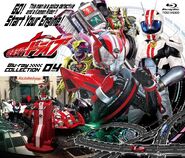 Retrieved from "https://kamenrider.fandom.com/wiki/How_is_the_Golden_Drive_Born%3F?oldid=504860"
Community content is available under CC-BY-SA unless otherwise noted.