Houdini Damashii (フーディニ魂, Hūdini Damashī, lit. "Houdini Soul") is an alternate indigo flying-based form of the ghost Riders themed after Harry Houdini, the early 20th century master magician and escape artist. What is somewhat lesser known about Houdini is that the man was also a debunker of the supernatural. Accessed through the Houdini Ghost Eyecon, this form bears the Persona Illusionist (ペルソナイリュージョニスト, Perusona Iryūjonisuto) helmet with the Face Restraint (フェイスリストレイント, Feisu Risutoreinto) faceplate. While it is mostly used by Kamen Rider Specter, it can also be used by other Riders.

While assuming Houdini Damashii, a Kamen Rider fuses himself with Specter's Machine Hoodie to don the Psychic Hunter Hood (サイキックハンターフード, Saikikku Hantā Hūdo) where that Rider gains the power of flight by using the wheels of the bike as jet turbines and the body of it as wings, thanks to the Lazuli Avionics (ラズリアビオニクス, Razuri Abionikusu) helm attached to the Psychic Hunter Hood that helps control flight. The Rider also has the ability to teleport instantly, catching any opponents into surprise.

As one of the 15 heroic souls, Houdini Damashii's power is also channeled through the Grateful Damashii which is accessed by Ghost via the Eyecon Driver G, appearing on Grateful's Armor Sublime as the HoudiPlate (フーディプレート, Hūdipurēto). [1]Manifesting as a body, the Houdini Ghost can manifest chains from his hands to attack or bind. Miracle! Infinite Thought!

In 2005, long after his death, Harry Houdini was reincarnated as a Parka Ghost by the Ghost Hunters with help from Sennin. Among the 15 luminary ghosts assembled by the lead Ghost Hunter, Ryu Tenkuji, who personally picked them with his reasoning being that these figures were people whose lives burned the brightest, their purpose was to counter the Gammaizers, the 15 deities of the Gamma World, in preparation for the Gamma invasion of the human world. Vacant Ghost Eyecons were prepared for each of the luminary ghosts, however, with the unforseen betrayal of Chikara Saionji leading to Ryu's death and the dissolution of the Ghost Hunters, all 15 ghosts were left sealed in unique objects which pertained to them each and would not be freed until the Gamma invasion finally arrived ten years later. Reminiscence! Secret of the Mind!

The Houdini Parka Ghost was unsealed at an unknown point in time by Makoto Fukami. For unknown reasons, it became stored in the Machine Hoodie despite its Eyecon remaining separate. Unlike the other heroic spirits, Houdini had always refused to lend Specter his power.

This was until Makoto's sister Kanon was abducted by Jabel. Makoto decided to confront Houdini's Eyecon, controlling the Machine Hoodie, head-on in a bid to gain Houdini's power. Houdini finally relented when Makoto stopped trying to force him to help and instead asked for his assistance. Using Houdini's power, Makoto as Specter was able to defeat Jabel in his empowered Gundari form. Anguish! The Stubborn Escape King!

Outmatched by Kamen Rider Necrom, Specter assumed Houdini Damashii, brushing past Necrom with Ghost Toucon Boost Damashii boarding him as they made their escape. Perfect! The White Kamen Rider!

Along with Nobunaga and Tutankhamun, Houdini (though only as an Eyecon instead of a summoned Parka Ghost) aided Takeru and Kanon Fukami in banishing the Necrom Eyecon to free Makoto, springing his Ghost Driver open by ramming into it, allowing Nobunaga to remove the Necrom Eyecon and throw it back to Alain. Explode! Flames of Friendship!

His Eyecon later possessed Yuki Shirai, through whom he asked Takeru if taking her to meet her seemingly revived deceased father was really the best thing to do, claiming that attempting to commune with the dead would only bring tragedy. Houdini describes in vague terms his own tale of attempting to speak with his late mother revealing only spiritualist frauds. However, as Takeru persists in his efforts and explains why not trying would be a worse result, Houdini agrees to lend his power as part of Ghost Grateful Damashii. Second Coming! Ordeal of the Escape King! Forever! Cries of the Heart!

Houdini was summoned by Ghost to stop Alain from cannibalizing his own life force while fighting the Gammaizer Fire as Necrom, using his chains to pull him back as his transformation was negated. Miracle! Infinite Thought!

Houdini was defeated alongside Nobunaga by Adel Magnetic during the disastrous engagement against Adel and his 11 remaining Gammaizers by the 15 Heroic Ghosts and Ghost Grateful Damashii, having chosen not to rely on Mugen Damashii's power alone while facing the Gammaizers. Viewing themselves as now obsolete, the heroic ghosts would enter a brief period of unresponsiveness before soon enough returning to Takeru's side, as he asserted his faith in them, against Gyro. Resurrection! Hero's Soul!

Acting on the advisement of Billy the Kid, Ghost Grateful Damashii summoned Houdini and Musashi to restrain the Gammaizer Magnetic Blade's magnetism and blades respectively, providing an opening for Billy the Kid to use his firepower to free Shinichiro Natsume from the Gammaizer's body. Courage! Tragic Resolution!

Attacked by Dark Necrom Yellow, Specter was robbed of his Eyecons which were taken as part of Argos' machination. When Takeru and his friends followed them to the Island of Eyecons, Houdini was found to be living in harmony as one of 100 reincarnated historical figure within the Village of Heroes. When Argos' Gamma forces attacked the village, Houdini was struck down and reduced back to an Eyecon which was recovered along with the others by Argos. Gathering all 100 heroic Eyecons, Argos used them as a sacrifice along with Darwin's power of evolution to convert Takeru's dead body into a vessel for the ultimate Eyecon, the Extremer Driver, which he intended to use to fulfill his ultimate agenda of converting all life on both Earth and the Gamma World into ghosts. Ultimately, however, Takeru was able to gain the strength of the 100 heroes along with his friend's spirits, allowing him to defeat Argos seemingly at the cost of his own existence only for the 100 heroes to use their power to restore his soul with the original fifteen heroes returning to his side as he came back to Earth. Kamen Rider Ghost the Movie: The 100 Eyecons and Ghost's Fateful Moment

Houdini was first in a succession of Specter's three personal Damashii which he assumed in his fight against the Next Genome Institute's Doral Bugster alongside Kamen Rider Brave. Later, while facing the Hatena Bugster, Ghost would bring forth all fifteen heroic spirits with the Eyecon Driver G only for the Bugster to repel even the God Omega Drive; Takeru would ultimately resort to a new power. Kamen Rider Heisei Generations: Dr. Pac-Man vs. Ex-Aid & Ghost with Legend Rider

Houdini is among the historical figures who are featured in Stories of the World's Greatest People, the book passed down to Takeru Tenkuji by Ryu Tenkuji. He is acknowledged under The Legendary Magician: Harry Houdini (伝説の奇術師 ハリー・フーディーニ, Densetsu no Kijutsu-shi: Harī Hūdīni). Anguish! The Stubborn Escape King! 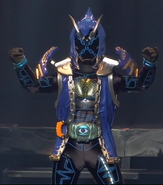 Sennin as Specter Houdini Damashii
Add a photo to this gallery

Necrom Houdini Damashii
Add a photo to this gallery

The Ghost Change Houdini Damashii was released alongside the DX Machine Hoodie and Houdini Ghost Eyecon.

Houdini Ghost
Add a photo to this gallery

Omega Drive (Houdini)
Add a photo to this gallery

As with the rest of the 15 heroic Parka Ghosts, Houdini is voiced by Tomokazu Seki (関 智一, Seki Tomokazu). When assuming the form of Machine Hoodie, Houdini is based on a Honda CBR650F. While possessing the body of Yuki Shirai in episodes 29 and 30, Houdini is portrayed by Arisa Komiya (小宮 有紗, Komiya Arisa), who is best known for her role as Yoko Usami

. His suit actor when manifesting as a body is currently unknown. His human form in Kamen Rider Ghost the Movie: The 100 Eyecons and Ghost’s Fateful Moment is portrayed by Jeremy Eaton (ジャーミー・イートン, Jāmī Īton).

Retrieved from "https://kamenrider.fandom.com/wiki/Houdini_Damashii?oldid=621470"
Community content is available under CC-BY-SA unless otherwise noted.