The gang must race to find out who the Switcher is- before the new 'hero' wipes out Fourze and Meteor to become the sole hero in the city...

Revealing his plan to replace Kamen Rider Fourze using the Ugly Duckling Society's membership, the Cygnus Zodiarts takes his leave as a wounded Kamen Rider Meteor escapes with the intent to get pay back for his defeat. The next day, after being interrogated by Tomoko over him ditching her, Ryusei joins the Kamen Rider Club as they deduce that the Ugly Duckling Society's president Misa Toriizaki is the Switcher. Confronting her about it as she berates Eguchi, Misa explains that she and her fellow members are all Cygnus before having Gentaro and Yuki thrown out.

Following them, Eguchi reveals that he knew Cygnus was attacking people yet wants to believe that he is not such a bad guy while revealing Misa is not the Zodiarts. However, on orders from Hayami to keep him from meddling, Kijima arrives to finish things with Gentaro as he becomes Fourze to defend himself before the Cancer Zodiarts takes his leave. Later joining the rest of the Kamen Rider Club after their own attempt to find the Switcher through the latter's sixth sense, Ryusei and Tomoko present Eguchi being attacked by the Cygnus Zodiarts for talking too much. Seeing this confirms the Switcher's identity as Gentaro decides to call Eguchi over.

With the other Club members dressing up to pose as people needing help while Gentaro walks past them, Eguchi helps retrieve a balloon for who turns out to be Yuki disguised as a little girl. Congratulating him for becoming a hero, the Kamen Rider Club reveals to him the footage that reveals Cygnus actually being a dark alter ego created when the youth obtained a Zodiarts Switch and has been slowly taking control. Managing to fight off his Cygnus side's temptation with the intent to hand the Zodiarts Switch over as it assumed Last One state, Eguchi wins Gentaro's friendship. However, Eguchi is snatched by the Cancer Zodiarts and taken to the Ugly Duckling Society where Misa and the others force him to transform.

Thanking his followers for their help in ridding him of Eguchi, the Cygnus Zodiarts uses Misa as a human shield to protect himself from a furious Fourze to everyone's shock. However, using the Aero Switch, Fourze gets the Cygnus Zodiarts to loose his hostage before the Cancer Zodiarts appears and drags the Kamen Rider off. With Hayami watching, Fourze using the Winch Module to disable his the Cancer Zodiarts's pincher before assuming Fire States to drive him off with Eguchi cheering after Meteor destroyed the Cygnus Zodiarts as he attempts to flee. Later, the Kamen Rider Club talks about how the Ugly Duckling Society has disbanded while Eguchi is doing good deeds. 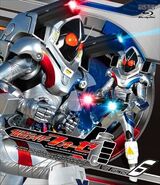 Retrieved from "https://kamenrider.fandom.com/wiki/Hero%27s_Desire?oldid=527856"
Community content is available under CC-BY-SA unless otherwise noted.