Takayuki Shibasaki
Heretic Rider, Go Forth! (外道ライダー、参る！, Gedō Raidā, Mairu!) is the twenty-fifth episode of Kamen Rider Decade. It is the concluding part of the World of Shinkenger arc which serves as the main body of Decade's crossover with its Super Hero Time partner, Samurai Sentai Shinkenger

, marking the first TV crossover between a Kamen Rider and Super Sentai show.

After Tsukasa reveals himself, Takeru realizes that Tsukasa is the "Decade" Narutaki warned him about. Before the two can fight, Narutaki arrives to tell Tsukasa he is to blame for the terror brought unto the world by the Ayakashi Chinomanako who now has the powers of Diend, and that the only way to save the worlds he entered is if he ceases to exist. After Takeru takes out the Nanashi and drives off Chinomanako as Shinken Red, Genta attacks Tsukasa believing that he is in league with Daiki until Natsumi takes him to the Hikari Studio, where Hikoma Kusakabe is hiding. When the other Shinkengers arrive, Daiki uses their fears to cause a fight to break out and escapes with Genta not far behind, leaving Natsumi to break it up before going to a room where all of Tsukasa's photos are kept. When Chinomanako attacks again, Genta ends his chase and contacts the Shinkengers who go off to fight the Ayakashi Rakider alone. Tsukasa, troubled by Narutaki's words, stays behind with Yusuke trying to convince him to help before he goes off on his own. By then, Hikoma comes forward and convinces Tsukasa to continue to find his place, regardless of what Narutaki has said to him. Tsukasa joins the battle just as Chinomanako and his summoned Eagle Undead and Moose Fangire have overpowered the Shinkengers and Kuuga. Decade and Shinken Red fight Chinomanako, who has summoned Kamen Rider Blade to fight with him. The other Shinkengers and Kuuga manage to destroy the Eagle Undead and Moose Fangire as Decade becomes Complete Form and uses the powers of Blade King Form to attack Chinomanako. Using the Blade Final Form Ride Card, he transforms Chinomanako's Blade into the Blade Blade before switching weapons with Shinken Red to use active Rekka Daizantou Attack Ride Card to destroy Chinomanako, saving the world. Daiki shows up just in time to snatch the Diendriver back, only to be thwarted by Shinken Gold who forces him to give back the Ika Origami in exchange for the Diendriver, and then everyone goes their separate ways. As Tsukasa and Yusuke are welcomed home by Eijiro and Natsumi, assuring Tsukasa that the photo studio is his home no matter what, they enter a new A.R. World. 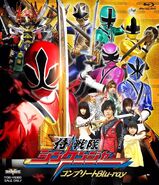 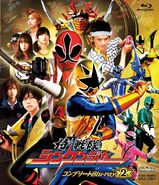