Much like the Heavy Acceleration Particle Measuring Device, it was called Pikopiko 2 (ピコピコ２号, Pikopiko Nigō, Blinky #2) due to the blinking noises it made. It was first introduced in its prototype form in Kamen Rider × Kamen Rider Drive & Gaim: Movie War Full Throttle, though the device was shorted out by Cyberoid ZZZ. The completed version of this device appeared in episode 12.

After "Pikopiko 2"'s destruction by the Judge Roidmude's voltage, Rinna repaired it and made several modifications to the device, such as the addition of a electric-proof vest and a more streamlined appearance. This gadget was later named Pikopiko 3 (ピコピコ３号, Pikopiko Sangō, Blinky #3).

Once Shinnosuke Tomari's identity as Kamen Rider Drive was revealed to the entire Special Investigation Unit, the machine was retired in favour of the more compact Shift Car Holder, which Genpachiro currently uses along with Shift Deco Traveller. However, Genpachiro still uses the electric-proof vest for additional protection.

Followed by the revealing of Makage, Brain and Nira as moles in the police forces, several troops were given mass-produced version of Pikopiko 3 and currently, Rinna is trying her best to reduce its size and weight under Akio Togama's orders. When the Tokyo Metropolitan Police Department begins production on the production model of Kamen Rider Mach, the Pikopiko 3 is fitted onto the back of the suit.

Under the wish of Akio Togama, the head of SSDC, Rinna created lighter versions of Heavy Acceleration Reducing Machine, called Pikopiko 4 (ピコピコ4号, Pikopiko Yongō, Blinky #4), which appears to be based on the Shift Car Holder, but with two smaller computer chips in place of Shift Cars. Originally, she made five models but was forced to create more of it with Kyu as the battle against the Roidmudes was nearing a close. Who Loves Heart the Most? Several of them were destroyed when a troop of Reaper Legion invaded the Drive Pit in order to ensure that no human would be able to resist the Heavy Acceleration upon the second Global Freeze. What is a Roidmude's Last Dream? Based on their color scheme, it is likely that Pikopiko 4 was intended to replace the previous model fitted onto the Mach production model suit. 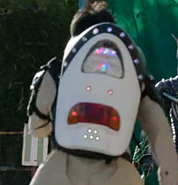 "Pikopiko 4"
Add a photo to this gallery

Retrieved from "https://kamenrider.fandom.com/wiki/Heavy_Acceleration_Reducing_Machine?oldid=340959"
Community content is available under CC-BY-SA unless otherwise noted.