Heavy Acceleration (重加速, Jūkasoku), often referred to by the public as Heaviness (どんより, Donyori), is a special ability of Roidmudes which creates a temporal field that distorts time and reduces G-forces for everything and everyone in it. Initiated by the use of their Core Driviars, it is represented as an energy field radiating from the Roidmudes, affecting everyone within the set area. People affected by Heaviness still have awareness of the situation due to the fact that the only part of the human body that is resistant to the distortions is the brain, thanks to the fact that Roidmude bodies are made up of a similar material to the cerebral cortex. As such, people can experience the odd sensation of passing out slowly. While the phenomenon is usually adverse to humans, it sometimes has a positive effect, as the distortion is slow enough to prevent a man from falling to his death from a great height.

As shown during the Crash Roidmude incident, some Roidmudes can involuntarily deactivate their time distortion effects when sufficiently damaged, which can be seen as a white dome retreating back into the Roidmude's body. During this time, Mr. Belt had warned Shinnosuke that even Drive can cause Heavy Accelerations.

If the Roidmudes decide to grant a human's desires, they can place a plate resembling a SD memory card on the host's body, which ensures that the host is unaffected by the time distortion effects of Heavy Acceleration. These plates can be reproduced as many as the Roidmudes want, but the Roidmude will relieve the plate from the host's possession after granting the host's desires in order to silence them once their evolution into an Advanced Roidmude is perfected. Later on, Roidmudes can hand Neo Viral Cores to their would-be fusions, granting them immunity to the Heaviness.

In Kamen Rider × Kamen Rider Ghost & Drive: Super Movie Wars Genesis, it is shown that anyone who possesses an Eyecon are also somehow unaffected by Heavy Accelerations, as shown by Makoto Fukami.

Time Jackers, such as Heure, can neutralize Heavy Accelerations with their temporal freezing power, even if they themselves are affected by the time distortions.

Kamen Rider Woz Ginga Finaly can neutralize Heavy Acceleration by canceling out the weight and gravity that Heavy Accelerations produce, thus rendering it moot. Interestingly, this theory has been initially applied by Genm God Max Gamer that true space power can't be affected by time and gravity manipulation.

In episode 21, after Chase receives modifications from Medic, Mashin Chaser can now create an improved version of Heavy Acceleration called Super Heavy Acceleration (超重加速, Chō Jūkasoku). The ability was first demonstrated in a classic manner by spraying a purple wave. After the tuning by Medic was completed, Chase channels energy into his Break Gunner, then punches it into the ground, which unleashes a purple corona that affect a small area in a certain radius once Chase's upgrade has fully completed. The effect is so much more powerful than the original Heaviness that it manages to slow down Drive's standard despite him having Shift Cars used to counter Heavy Accelerations, and the start up of the Super Heaviness field also sends Drive airborne. This Super Heavy Acceleration is so strong, most small objects get disintegrated.

So far, Shinnosuke only has two forms capable of countering this new power: Type Dead Heat, although the form suffers from minor sluggish condition (though it is enough to let a normal human get away), and Type Formula, which has so much power that it can move a supersonic speeds even in Super Heavy Acceleration while still retaining its strength.

It is unknown what happened to Chase's ability to use Super Heavy Acceleration waves after he exploded in his second encounter with Drive Type Formula. When the Super Heavy Acceleration was used by Chase, Heart noted it as Chaser's new ability rather than saying Chase, meaning that the power might be tied to the Mashin Chaser Form. It is assumed that Chase simply is refusing to use the ability after turning over a new leaf and becoming Kamen Rider Chaser.

In episode 34, Medic upgraded Heart and granted him said ability, performing in a similar manner to Chaser by summoning a large quantity of energy from his fist and slam it onto the ground, producing a red corona variant of it. During that same episode, it showed that Roidmudes without the Super Heavy Acceleration upgrades are also not an exception from the effect, when Brain was knocked into Heart's field by Chaser.

As seen in the Gunman Roidmude case, there were special band-like devices created from Roidmude 018's body that can cause Heavy Acceleration surges without leaving any particles behind, though these artificial surges have less ground to occupy, with the device in question being quite capable of being overloaded and stop working, with the bonus effect of somehow wiping away memories related around the Roidmudes. The peddling of these devices was soon stopped by Kamen Rider Mach, who incidentally is also able to cause Heavy Acceleration surges, with his energy field being tinted silver.

During the crossover with the Ninningers, the effects of a Slowdown is combined with the Terrible Pressure attack of Youkai Buruburu

, who is created through the combination of a corrupted Sealing Shuriken

and a Spider Viral Core, creating a similar effect to the one Chase can create. Instead of actually slowing down those affected however, it instead amplifies their responses to fear and makes them unable to move. This combined ability is inherited by Roidmude 089 ("Doctor D") who takes Buruburu's Sealing Shuriken to transform into a copy of the Youkai. Shinnosuke and Go are able to overcome the effects by transforming into Types Formula and Dead Heat respectively, while the Ninningers simply harden their resolve to break through their fear.

During the climax of the series, the Reaper Legions (now under Banno/Gold Drive's wing) demonstrated their Heavy Acceleration on three helpless humans, turning them into data for the Sigma Circular's awakening, as it was Gold Drive's plan to ensure a true second worldwide Global Freeze where any who resist are denied a physical form. What is a Roidmude's Last Dream?

After awakened, Sigma gained the ability of Heavy Acceleration and activated the Second Global Freeze. It digitizes humans into data and thus creating a new world under Banno's will. Even those who possess regular Shift Cars and Signal Bikes are also affected. Only Roidmudes who have achieved Over Evolved and Drive in Type Tridoron are shown to be able to move freely, however Medic was an exception, possibly due to Banno's reprogramming on her. Why Must They Fight?

Another Drive, whose identity is Paradox Roidmude/Another World, used Heavy Acceleration while in his Another Rider form. Heure stopped this ability due to his Time Jacker powers, though only for a short while. Geiz Myokoin and Black Woz can go through Heavy Acceleration by going to their GeizRevive Shippu and GingaWakuesi forms. 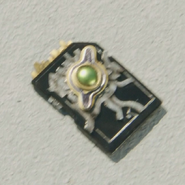 Roidmude 018's wristband
Add a photo to this gallery

After Crash Roidmude was being attacked, the Heavy Acceleration area was eliminated.

A trio of Reaper Units transform three humans into data

Another Drive using Heavy Acceleration
Add a photo to this gallery

Retrieved from "https://kamenrider.fandom.com/wiki/Heavy_Acceleration?oldid=568291"
Community content is available under CC-BY-SA unless otherwise noted.