The Tomorrow Build Will Create

Build can perform a powerful rapid blast attack depending on how many times the Revol-Magazine has been spun, increasing in strength and duration from one to nine spins.

The Hawk Gatlinger's finisher is the Full Bullet (フルバレット, Furu Baretto): Spinning the Revol-Magazine ten times causes the gun to surround the target with a spherical white energy graph, trapping them inside. Build then charges the Hawk Gatlinger with orange energy before firing at them with bullets that take the form of energy hawks. This attack can be used against one enemy or multiple

Build can combine the Hawk Gatlingers’s finisher with the Build Driver's to perform a powerful attack.

Evol can combine the Hawk Gatlingers’s finisher with the Evol Driver's to perform a powerful attack. 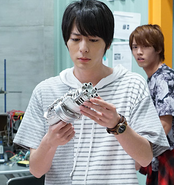 The incomplete "Something Gatlinger" prior to the HawkGatling Best Match's discovery