Gyro (ジャイロ, Jairo) is a general of the Gamma who assumes the form of Gamma Ultima (眼魔ウルティマ, Ganma Urutima, lit."Eye Devil Ultima"). He was a former instructor of Alain.

Dispatched to the human world to enforce the Emperor Adel's will, Gyro was deduced by Igor to be a replacement for Jabel who was abandoned after being repeatedly defeated and reduced to his flesh body, envisioning that he would provide even more entertainment. Flanked by two Gamma Superiors, Gyro confronted the exiled Prince Alain and the humans he now associated himself with, voicing that he would have to educate him again, proceeding to assume his Gamma Ultima body as the face-off was watched from afar by Igor. With the Gamma Superiors he sent quickly neutralized, Gyro personally engaged the three Kamen Riders: Ghost Toucon Boost Damashii, Specter Nobunaga Damashii and Necrom Grimm Damashii, single-handedly overwhelming them in both hand-to-hand combat and swordsmanship. In a bid to take down this intimidating opponent, Ghost used the Eyecon Driver G to transform into Grateful Damashii, reverting his fellows to their default Damashii in the process, to launch a Triple Rider Kick only for Gyro to use his power to reverse their finishers, forcing the bewildered Kamen Riders to make their escape amidst Gyro's firepower. With no sight of the Riders, Gyro took his leave as Igor noted that he was as scary as ever. Bizarre! Power of the Gammaizers!

Gyro appeared again before Necrom and Deep Specter as they attempted to destroy the last of the gates created by the Gamma, vowing that this time he would destroy Alain. Transforming and easily matching both Riders, with Deep Specter temporarily leaving the fight to save Akari from the Gammaizer's attack, Gyro soon enough forced Alain out of his transformation, proceeding to prepare his finisher upon the defenseless prince. However, Alain was saved by Deep Specter who, accessing his Gekikou Mode for the first time, flew in and matched Gyro's power, with Gyro being forced back through the Gamma Hole as it was destroyed. Reminiscence! Secret of the Mind!

Gyro observed from afar as Adel personally led the remaining 11 Gammaizers into battle with Ghost and the 15 luminary Parka Ghosts to bring out the power of Mugen Damashii. Questioning why Adel chose to come himself, Gyro pondered if he was no longer of use to Adel. Back in the Gamma World, Gyro approached Adel with a request to allow him to battle Ghost's Mugen Damashii, assuring Adel that he could deal with this matter which was beneath the Emperor. His request granted by Adel, Gyro returned to the human world calling for Takeru, leading Yurusen to alert Takeru who confronted him alongside Akari. Making it clear that his intention was to face and defeat Mugen Damashii, Gyro attacked Takeru. Assuming the form of Gamma Ultima, Gyro was surprised to be met by Ghost's Ore Damashii, with Ghost refusing to rely on Mugen Damashii alone. Due to the unresponsiveness of the heroic Ghost Eyecons following their defeat at the hands of Adel, Ghost was left at a disadvantage against Gyro who quickly overwhelmed him to the point of shattering his transformation, insisting that Takeru use the power of Mugen Damashii. With Takeru refusing to do so, asserting his confidence in the heroic ghosts, Gyro proceeded to attempt to destroy him and the Eyecons, however, the heroic ghosts rejoined Takeru in battle. Overwhelmed with his Gamma Commandos by Ghost using a succession of his 10 heroic Damashii, Gyro was defeated by Ghost Grateful Damashii's Mega Omega Formation which destroyed his Gamma body. Resurrection! Hero's Soul!

Gyro witnessed the mass disappearances of people in the Gamma life support coffins, reporting this to Emperor Adel who insisted that everything was fine. Unassured, Gyro voiced concern at what this could mean for their world, but stood down when his consciousness was briefly overriden by Adel through his connection to the Great Eye. Horrible! Disappearing World!

In the end, Gyro has awakened from the life support capsule. Infinity! Power of Humanity!

Gyro was one of the first to discover the return of Danton on the Gamma World. After being fatally wounded by Danton, Gyro's body is then absorbed into Danton himself. Kamen Rider Ghost RE:BIRTH: Kamen Rider Specter 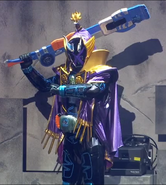 Gyro as Specter Nobunaga Damashii
Add a photo to this gallery

As a Gamma Ultima, Gyro proves to be a very tough opponent. He was able to easily overwhelm all 3 heroic Kamen Riders in their advanced forms (Ghost Toucon Boost Damashii, Specter Nobunaga Damashii and Necrom Grimm Damashii) at the same time, as well as proficiently used his special ability to cancel a Triple Rider Kick and forced the three Riders to retreat.

Gamma Hole creation
As a Gamma, Gyro possesses the ability to create miniature Gamma Holes by merely pointing and making the shape of an eye with his hand, allowing him to travel from his own world to the human world and back.
High combat proficiency
As Alain's former instructor, Gyro is extremely proficient in combat. He often relies on delivering a series of quick punches to overwhelm his opponents such that they are unable to keep up with him, as shown during his battle with Deep Specter and Necrom. He also seems to possess the ability to charge his attacks with a yellow-colored energy.

As with all Gamma, Gyro's natural and basic form is the Gamma Eyecon (ガンマアイコン, Ganma Aikon).

Temporal Reversal
Gyro is able to reverse the flow of time of his surroundings to defend himself from attacks, for example from the Triple Rider Kick performed by Ghost Grateful Damashii, Specter, and Necrom.
Fireball Projection
Gyro can shoot blue fireballs from his hand.

Intangibility
As with all Gamma, Gyro can turn himself invisible and intangible from a human's eyes. Only those whom wielded Eyecons were granted the ability to see him. Also, through the use of Kumo Lantern and Shiranui formula can negate this ability as well.
Gundari possession
Gamma Superiors have the ability to possess and enhance the body of a Gundari.

Nobunaga Damashii (ノブナガ魂, Nobunaga Damashī, lit. "Nobunaga Soul") is Specter's violet and gold daimyo-based form themed after Oda Nobunaga, the 16th century Japanese warlord who ruled over a majority of Japan through brutal conquest and mastery of the rifle which led to the unification of the country after his death and the end of the chaotic Sengoku period. Accessed through the Nobunaga Ghost Eyecon, this form bears the Persona Warlord (ペルソナウォーロード, Perusona Wōrōdo) helmet with the Face Dual Arquebus (フェイスデュアルアーキバス, Feisu Dyuaru Ākibasu) faceplate. Gyro is possessed by Nobunaga in the stage show and assumes this form.

Retrieved from "https://kamenrider.fandom.com/wiki/Gyro?oldid=550117"
Community content is available under CC-BY-SA unless otherwise noted.