Gulds (ガルド, Garudo) are Kanzaki's bird-like Mirror Monsters, serving him in maintaining the Rider War by eliminating those who refuse to fight and those who get too close to uncovering his plans. 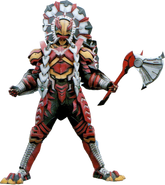 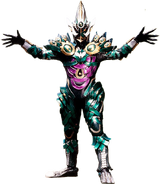 GuldMirage
Add a photo to this gallery

Guld means "Gold" in Danish. Additionally, when spoken in Japanese, it sounds similar to Garuda, a mythical bird or bird-like creature in Hindu mythology, further emphasizing the bird motif of the Gulds.

Retrieved from "https://kamenrider.fandom.com/wiki/Gulds?oldid=673565"
Community content is available under CC-BY-SA unless otherwise noted.