Guardians (ガーディアン, Gādian) are peace-keeping enforcement humanoid type robots that have been mass produced by the government of three areas as support ground troops for their special forces.

Manufactured by Namba Heavy Industries Ltd., however, they turned out to be sleeper agents of Faust, an activation command given by Blood Stalk allowing their true programming to surface and making them loyal only to Faust.

Manufactured by Namba Heavy Industries Ltd., the robotic Guardians were provided to compliment the peace-keeping forces of the three nations of Japan created following the Sky Wall Disaster of 2008; while Taizan Himuro's Touto held a more pacifistic stance compared to Hokuto and Seito, the Guardians were ultimately adopted there by 2013.

A series of Guardians were deployed by Gentoku Himuro to apprehend the escaped murderer Ryuga Banjo, but the first squad was taken out by the former pro-fighter's skills and torn apart. A second platoon was sent in after the Strong Smash was defeated by Kamen Rider Build to capture Ryuga with human militia forces backing them up, but the vigilante superhero rescued Ryuga and the robot platoon was sent to chase after them on motorcycles while other units tried to shoot them down from a vantage point. Kamen Rider Build used his skills with the help of Ryuga to destroy them and escape. That One with the Best Match

The Guardians were then programmed to try to hunt down and capture the Kamen Rider by any means necessary for his aid in the escape of the fugitive Ryuga. The Innocent Runaway

When Prime Minister Yoshiko Tajimi declared war on Touto, a squad of Guardians were sent alongside a Flying Smash Hazard and Press Smash Hazard as part of an invasion by Hokuto. They were met and ultimately wiped out by Build and Cross-Z. Elsewhere, the Guardians of Touto were unable to stop Kamen Rider Grease as he broke through the Sky Wall, losing many of their number to him. The Weaponry Hero

A squad of Faust Guardians accompanied the prototype Nebula Hell Bros which had been sent to attack a Fullbottle holding facility in Touto, where it was confronted by Sento Kiryu. First Chapter The Guardians were reduced to scrap by Build ToraUFO Form. Next Chapter

With the bulk of Hokuto's forces engaged in Touto, Seito eventually sent its own Guardians to seize Hokuto. Those few Hokuto Guardians remaining to safeguard the Prime Minister were wrecked by Seito's own Kamen Rider as Blood Stalk allowed the Seito forces to take Tajimi into custody. Victory of Tears

Under Stalk, Seito Guardians were used to test Gentoku Himuro, with his endurance eventually allowing him to become Kamen Rider Rogue. A Man Called Rogue

Led by the Washio brothers Rai and Fu, Seito Guardians seized the Sawatari Farm in Hokuto to demonstrate Seito's might to Touto. Returning home to confront the invaders, Kiba swiftly destroyed the Guardians as Owl Hazard Smash before being defeated by the Hell Bro's Kaisers. A second squad of Guardians guarded Kiba as he was held hostage by Seito, but were easily defeated by the Castle Hazard Smash when he and Grease arrived to rescue Kiba. The Phantom of the West

Invading Touto, Seito Guardians alongside the Washio brothers overwhelmed the Touto Guardians and soldiers, clearing a path for Gentoku Himuro to enter the government office and claim the Pandora Box. A Man Called Rogue

Alongside the Hard Guardians, several Faust Guardians defended Pandora Tower during Evolto and Kamen Riders fighting. They were fought through by Kamen Riders Build Genius, Cross-Z Magma and Rogue while Grease stayed behind in the lower levels to engage the fake Hokuto Three Crows. An Oath to Be The One

After the merging of the both worlds, the Guardians are created for peacekeeping purposes. Due to the invasion of Down Fall, all of the Guardians and the Hard Guardians are being hacked by the terrorist group and turning them into their soldiers.

The robots have advanced A.I., capable of speaking and interacting with humans and are programmed with basic combat training skills to combat the threat of the Smash organisms or apprehend criminals, to the point of having a human outfighting them barehanded being a surprise. Each Guardian is equipped with an assault rifle with a large bladed bayonet on the end and a belt that carries a handgun in a holster along with various tools and combat gear. Some have even shown skill in the use of other weapons such as rocket launchers.

At least under service of Touto, Guardians lack the ability to think flexibly, as shown when several troops dismissed Sento when he quickly "hid" by canceling his transformation as Kamen Rider Build, even though he was sitting right where Build had disappeared a second prior and there was no sign of anyone else. However, several times they saw through Ryuga's disguises, perhaps because his face was still visible.

The model of Guardian used by Faust, serving their true purpose as Faust footsoldiers. They are equipped to self destruct using built-in explosives to carry out assassination missions.

This Guardian model is used by the Touto government. They are equipped with cameras to record all engagements.

This Guardian model is used by the Hokuto government.

This Guardian model is used by the Seito government.

Guardians used by Foundation X. They're also a part of Enigma.

Guardians used by Down Fall.

Multiple Guardians can combine into a larger battle robot, called the Guardian (Union State) (ガーディアン(合体状態), Gādian (Gattai Jōtai)). It can use the Safeguard Rifles of the individual Guardians. A red variant is formed when Blood Stalk jumps into the center of one as it is forming.

A heavy-duty Guardian model developed by Namba Heavy Industries Ltd.. Along with heavier armor than the standard model, a Battle A.I. unit is installed in the head. It is equipped with a gatling gun on the right arm, a shield with an integrated claw on the left arm, and a missile pod on each shoulder

Multiple Hard Guardians can combine into a larger battle robot, called the Hard Guardian (Union State) (ハードガーディアン(合体状態), Hādo Gādian (Gattai Jōtai)). It can use the machine guns and missile pods of the individual Hard Guardian units and its performance is 1.5 times that of the normal Guardians' Union State.

The Guardians are portrayed by various suit actors. 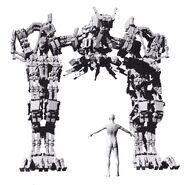 Retrieved from "https://kamenrider.fandom.com/wiki/Guardian?oldid=667295"
Community content is available under CC-BY-SA unless otherwise noted.