Aside from being Kamen Rider G3's personal bike, it can also store various of his equipment on board, which includes the GM-01 Scorpion (front left), GG-02 Salamander (front right), GS-03 Destroyer (back right), GA-04 Antoures (back left), and GX-05 Kerberos (back of seat).

The Guard Chaser has the following parts:[1]

This motorcycle was oftenly ride by Kamen Rider G3 in anti-Unknown operations.

In 2019, a member of the G3 Team took the GS-03 from their Guard Chaser bike to use in the fight against the Another Agito horde. Soon after, an Another Agito threw the bike at Kamen Rider Zi-OTrinity, who used the Saikyo Girade to cut it into halves which exploded. 2001: Awaken, that Agito! 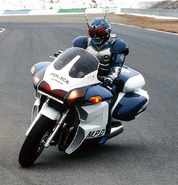 G3 riding on his Guard Chaser.

G3-X riding on his Guard Chaser.
Add a photo to this gallery

Retrieved from "https://kamenrider.fandom.com/wiki/Guard_Chaser?oldid=659143"
Community content is available under CC-BY-SA unless otherwise noted.