Grimm Damashii (グリム魂, Gurimu Damashii, lit. "Grimm Soul") is an alternate dark green author-based form of the ghost Riders based on the Brothers Grimm, known individually as Wilhelm and Jacob Grimm, two late 17th and early 18th century German writers. This form bears the Persona Fairy Tale (ペルソナフェアリーテイル, Perusona Fearī Teiru). In this form, a Kamen Rider can use the G Pen (Gペン, Jī Pen) on their shoulders for offensive and defensive attacks. While it is mostly used by Kamen Rider Necrom, it can also be used by other Riders.

The Brothers Grimm are distinct among the 15 heroic souls in that they are two individuals reincarnated as the same Ghost Eyecon and, while they indeed appear as a single ghost in the real world, are shown to exist as separate individuals within their own Eyecon.

As one of the 15 heroic souls, Grimm Damashii's power is also channeled through Grateful Damashii which is accessed by Ghost via the Eyecon Driver G, appearing on Grateful's Armor Sublime as the Grimm Legger (グリムレッガー, Gurimu Reggā). [1] After Grateful Damashii is deactivated, the Grimm and Sanzo Eyecons are notably seen flying off back to Alain.

In 2005, long after their deaths, the Brothers Grimm were reincarnated as a Parka Ghost by the Ghost Hunters with help from Sennin. Among the 15 luminary ghosts assembled by the lead Ghost Hunter, Ryu Tenkuji, who personally picked them with his reasoning being that these figures were people whose lives burned the brightest, their purpose was to counter the Gammaizers, the 15 deities of the Gamma World, in preparation for the Gamma invasion of the human world. Vacant Ghost Eyecons were prepared for each of the luminary ghosts, however, with the unforseen betrayal of Chikara Saionji leading to Ryu's death and the dissolution of the Ghost Hunters, all 15 ghosts were left sealed in unique objects which pertained to them each and would not be freed until the Gamma invasion finally arrived ten years later. Reminiscence! Secret of the Mind!

The Grimm Eyecon was collected offscreen by Chikara Saionji, but after Takeru’s wish to bring back Kanon, it was acquired by Jabel. It was soon used by Alain, forcing it into working for him. Perfect! The White Kamen Rider!

However, as the series progresses, Alain has shown to have reformed and vowed to protect the treasures of the Earth. It is used by Takeru to transform into Ghost Grateful Damashii, but after Ghost deactivates Grateful Damashii, the Grimm Eyecon, alongside the Sanzo Eyecon, still decide to return to Alain instead of staying with Takeru, though he had lost the ability to force them into activating. Intimate! The Giant Eyecon!

After showing his will to protect and save Kanon and Makoto, the Grimm Eyecon activated itself and let him continue using it. Conflict! The Terms of Resolution!

It is revealed that there are two Grimm Parka Ghosts inside the Eyecon, Jacob (older brother) having blue eyes and Wilhelm (younger brother) having orange, both of whom fuse together to form a single Parka Ghost with green eyes. Jacob is portrayed as being stern, serious, and focused on the work at hand, while Wilhelm is more childlike and cites the need for enjoyment in life. Their Eyecon possesses Yuichi Katagiri, whose brother is lost in the Dream World trap set by Igor, first when he visits the Daitenku Temple and again while inside the Dream World. Wilhelm says that he and the others should be left to enjoy their fantasy dreams before Jacob takes over and insists to take things seriously, the two proceeding to swap control back and forth in rapid succession. Their Eyecon flies out of Yuichi and sucks Takeru inside, where the two brothers split into separate Parka Ghosts and continue arguing; he tries getting them to stop, but they both kick him out. Their bickering later causes Ghost's Grateful Damashii form to be unable to perform its finisher, their symbol fading from the Grimm Legger plate, and when Takeru is knocked out of his transformation, the Grimm Eyecon flies off and is picked up by Igor.

Jacob: "Now I can remember why we started collecting fairy tales. It was so that I can tell them to my younger brother."

Wilheim: "Brother's stories were so much fun. Also, Brother looked so happy when he was telling them."

Igor uses the Eyecon to assume Gamma Superior Grimm, reentering the Dream World before activating the power of Grimm Damashii's shoulder-mounted G Pens to "rewrite" the Dream World into an amalgamation of multiple of the Brothers' Grimm fairy tales, attempting to trap Takeru and the others. However, when he sees it not working, he attacks, but Ghost easily beats him back with Mugen Damashii, the Grimm Eyecon ejecting itself from Igor's Proto Mega Ulorder. After the battle, Takeru is brought inside the Eyecon again, where the two Grimms thank him and merge back into a single Parka Ghost, having resolved their dispute. Real Worth! Merriment Power!

Engaging the Gammaizer Wind, Necrom assumed Grimm Damashii, utilizing his G Pens only for the Gammaizer to easily repel his attack and blast him back, observing Necrom to be a minimal level threat. Insulted, Necrom attempt to assume Sanzo Damashii only to forced out of his transformation by the Gammaizer's assault when the Eyecon gave no response, forcing Ghost Mugen Damashii and Deep Specter to save him. Furious! Idol's Declaration!

Grimm was defeated by Adel Climate during the disastrous engagement against Adel and his 11 remaining Gammaizers by the 15 Heroic Ghosts and Ghost Grateful Damashii, having chosen not to rely on Mugen Damashii's power alone while facing the Gammaizers. Viewing themselves as now obsolete, the heroic ghosts would enter a brief period of unresponsiveness before soon enough returning to Takeru's side, as he asserted his faith in them, against Gyro. Resurrection! Hero's Soul!

During his engagement against Adel and the remaining Gammaizers alongside Ghost, Necrom assumed Grimm Damashii, using the Himiko Eyecon provided by Ghost to perform an Omega Finish against the Gammaizers Climate and Planet only to be overwhelmed by their combined power. Upheaval! Decision of the Secretary! At the mercy of Adel and the Gammaizers, Necrom swapped Grimm out for Sanzo, performing his Omega Ulord to cover the escape of himself and his friends. Astonishing! Hermit's Truth!

Attacked by Dark Necrom Blue, Necrom was robbed of his Eyecons which were taken as part of Argos' machination. When Takeru and his friends followed them to the Island of Eyecons, the Grimms was found to be living in harmony as one of 100 reincarnated historical figure within the Village of Heroes. When Argos' Gamma forces attacked the village, the Grimms were struck down and reduced back to an Eyecon which was recovered along with the others by Argos. Gathering all 100 heroic Eyecons, Argos used them as a sacrifice along with Darwin's power of evolution to convert Takeru's dead body into a vessel for the ultimate Eyecon, the Extremer Driver, which he intended to use to fulfil his ultimate agenda of converting all life on both Earth and the Gamma World into ghosts. Ultimately, however, Takeru was able to gain the strength of the 100 heroes along with his friend's spirits, allowing him to defeat Argos seemingly at the cost of his own existence only for the 100 heroes to use their power to restore his soul with the original fifteen heroes returning to his side as he came back to Earth. Kamen Rider Ghost the Movie: The 100 Eyecons and Ghost's Fateful Moment

Necrom assumed both Grimm and Sanzo Damashii in his fight against the Next Genome Institute's Doral Bugster alongside Kamen Riders Snipe and Lazer. Later, while facing the Hatena Bugster, Ghost would bring forth all fifteen heroic spirits with the Eyecon Driver G only for the Bugster to repel even the God Omega Drive; Takeru would ultimately resort to a new power. Kamen Rider Heisei Generations: Dr. Pac-Man vs. Ex-Aid & Ghost with Legend Rider

Via the Eyecon Driver G, Grimm was among the Parka Ghosts summoned by Takeru to aid him in the fight against Foundation X's Guardians. Kamen Rider Heisei Generations FINAL: Build & Ex-Aid with Legend Riders

The Brothers Grimm are among the historical figures who are featured in Stories of the World's Greatest People, the book passed down to Takeru Tenkuji by Ryu Tenkuji. They are acknowledged under The Dream Painters & Fairy Tale Writers: Brothers Grimm (夢を描く童話作家 グリム兄弟, Yumeokaku Dōwa Sakka: Gurimu Kyōdai).[2]

Grimm's entry was ultimately left unseen on-screen, but was among those unveiled by Televi-kun Magazine. 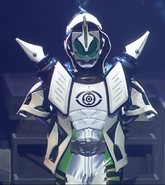 Igor as Necrom Grimm Damashii
Add a photo to this gallery

Deep Specter Grimm Damashii
Add a photo to this gallery

Grimm Damashii was released as part of the Ghost Change set GC-10 alongside Sanzo Damashii. 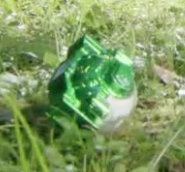 Grimm Ghost
Add a photo to this gallery

As with the rest of the 15 heroic Parka Ghosts, Grimm is voiced by Tomokazu Seki (関 智一, Seki Tomokazu). While possessing the body of Yuichi Katagiri, Grimm is portrayed by Isao Nonaka (野仲 イサオ, Nonaka Isao). Their suit actors as full body Parka Ghosts are unknown.

Retrieved from "https://kamenrider.fandom.com/wiki/Grimm_Damashii?oldid=621449"
Community content is available under CC-BY-SA unless otherwise noted.