Gridon and Bravo, the Strongest Tag

After watching Kouta, Mitsuzane, and Zack battle Inves, Jonouchi realizes that the dance team days are over, again. Later, Oren arrives to begin Jonouchi's next set of training. Kaito tries to tell Kouta about the Over Lords, while DJ Sagara is confronted by Ryoma, Yoko, and Sid. After Gaim, Bravo and Gridon fought the Inves that appeared Oren and Jonouichi goes home but Jonouichi reveals to Oren that the Inves Game is no more. Later, Oren finds a crack and tries to investigate it but discovers something yet to be revealed.

Armored Riders Gaim, Knuckle, and Ryugen confront a large number of Inves at the same time, and after defeating them, they point out that the number of Cracks has increased recently. Jonouchi watches the scene from afar and ovehearing one of his former team mates talking with Mai, he realizes that she thinks too little of him, much to his dismay. Once Oren realizes his worries, he decides to put him on a strange, but harsh, training routine to toughen him up. Meanwhile, Ryoma, Yoko, and Sid discuss the fact that their investigation on DJ Sagara has been fruitless, as no further information about him has been uncovered, when Sagara himself appears before them. When questioned about the help he has provided to Kouta, Sagara claims that he acted to level up the competition. While Ryoma confirms that the Project Ark is only an excuse for him to have access to the Yggdrasill Corporation's resources, Sagara confirms Ryoma's theory that Helheim Forest has appeared on Earth past occasions, revealing that when it happens, a person is chosen to determine the fate of mankind once claiming the "Golden Apple", leaving after hinting that the Over Lords are the key to obtain it. Back in Helheim Forest, Kouta attempts to make contact with the Over Lords again when Kaito appears and belittles Kouta's efforts to reason with them, claiming that the Over Lords will only listen to their requests once defeated by them. At Charmont, Oren has Jonouchi perform a drag show in order to make him more confident, but he is only horrified when the girls all come into the bakery and see him in drag. Ashamed, he flees to Drupers (in the middle of their strawberry special), where he meets Kouta and confides to him that he lacks a direction to follow in life once the Inves Games were called off. However, Oren arrives, believing Kouta is misleading his disciple. He transforms and makes a mess of Drupers, only for Iyo to attack him, giving Kouta time to escape and transform. The two fight until several Inves appear to attack them, and Armored Riders Gaim Kachidoki Arms and Bravo fight back when Jonouchi decides to join the fight as well, transforming into Armored Rider Gridon, who is knocked down while protecting the others. Once the Inves are defeated, Oren compliments Jonouchi for finally showing his resolve as he carries him away and learns from him about the existance of the Cracks. Back at Drupers, Kouta apologizes to Mai for hiding secrets from her, while Oren finds a Crack and passes through it to investigate the other side.

Kamen Rider Gaim Volume 7 features episodes 25-28: Gridon and Bravo, the Strongest Tag, Baron's Genesis Transformation!, When You Know the Truth... and The Betrayal of Zangetsu. [2] 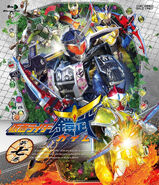 Retrieved from "https://kamenrider.fandom.com/wiki/Gridon_and_Bravo,_the_Strongest_Tag?oldid=525207"
Community content is available under CC-BY-SA unless otherwise noted.