Goldphoenix resembles a robotic phoenix. It has a red and blue Odd Eyes (オッドアイ, Oddo Ai) and always wears golden flames on its Goldbody (ゴルトボディー, Gorutobodī). The left wing has the ability to control a fiery fire and the right wing has the ability to control a wind storm, and it is colored with red and blue Goldsymbols (ゴルトシンボル, Gorutoshinboru). With instantaneous movement ability with the wings of Goldwing (ゴルトウイング, Gorutouingu), and can move with a single flapping, each blade (feathers) has the sharpness that even shreds steel. The 3 Survive cards' design are said to be imitating Goldphoenix.

Only appears in the final episode when Odin activates his Final Vent.

Goldphoenix appear in Kamen Rider Zio Spin-off RIDER TIME Ryuki. It was shown that it screams like a hawk.

The most powerful Contract Monster; it's assumed that like all the other Mirror Monsters, Goldphoenix was created by Yui and Shiro's pictures from their childhood. Because of Odin's tendency to reappear, it is unknown what happens to Goldphoenix when its contractor dies. It's also unknown what happened to it at the conclusion of the Rider Battle, but following the time reversal, it can be assumed that it never existed to begin with.

Through the use of certain Advent Cards, parts of Goldphoenix's body can be used by Odin as weapons or other equipment. 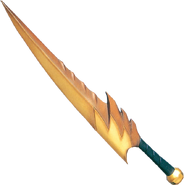 Goldshield
Add a photo to this gallery

Retrieved from "https://kamenrider.fandom.com/wiki/Goldphoenix_(Ryuki)?oldid=673584"
Community content is available under CC-BY-SA unless otherwise noted.