Goemon Damashii (ゴエモン魂, Goemon Damashī, lit. "Goemon Soul") is an alternate chartreuse ninja/kabuki-based form of the ghost Riders themed after Ishikawa Goemon, a Japanese ninja thief whom is literally the Robin Hood of Japan, as he stole from the wealthy and gave to the poor, though he was executed by being boiled alive. Though accurate historical accounts of his life are scarce, many folk legends are told based on his supposed exploits and are reenacted in classic kabuki theater plays, thus making him a prominent figure in modern Japanese pop culture. Accessed through the Goemon Ghost Eyecon, this form bears the Persona Superstar (ペルソナスーパースター, Perusona Sūpāsutā) helmet with the Face Kumadori (フェイスクマドリ, Feisu Kumadori) faceplate. While it is mostly used by Kamen Rider Ghost, it can also be used by other Riders.

As one of the 15 heroic souls, Goemon Damashii's power is also channeled through the Grateful Damashii which is accessed by Ghost via the Eyecon Driver G, appearing on Grateful's Armor Sublime as the Goemon Tecter (ゴエモンテクター, Goemon Tekutā). [1] Manifesting as a body, the Goemon Ghost fights with his weapon of choice being the Sunglasseslasher Sword Mode. Appearance! The Mysterious Warrior!

In 2005, long after his death, Ishikawa Goemon was reincarnated as a Parka Ghost by the Ghost Hunters with help from Sennin. Among the 15 luminary ghosts assembled by the lead Ghost Hunter, Ryu Tenkuji, who personally picked them with his reasoning being that these figures were people whose lives burned the brightest, their purpose was to counter the Gammaizers, the 15 deities of the Gamma World, in preparation for the Gamma invasion of the human world. Vacant Ghost Eyecons were prepared for each of the luminary ghosts, however, with the unforseen betrayal of Chikara Saionji leading to Ryu's death and the dissolution of the Ghost Hunters, all 15 ghosts were left sealed in unique objects which pertained to them each and would not be freed until the Gamma invasion finally arrived ten years later. Reminiscence! Secret of the Mind!

The Goemon Parka Ghost was unsealed at an unknown point in time by Chikara Saionji. After the 15 Eyecons were gathered and granted Takeru's wish before being dispersed, the Goemon Eyecon was recovered by Onari, Magnificent! The Mysterious Eye! who repeatedly urged Takeru to use it. Ultimately, Ghost, in Toucon Boost Damashii, would assume Goemon Damashii for the first time to defeat the reincarnated Katana Gamma. Exciting! A Free Man!

Acting in defense of Makoto Fukami, Ghost assumed Toucon Boost Damashii then Goemon Damashii against Jabel, who relished this combat experience as opposed to Specter only to be soon called off by Alain. Anguish! The Stubborn Escape King!

Goemon was defeated by Adel Spear during the disastrous engagement against Adel and his 11 remaining Gammaizers by the 15 Heroic Ghosts and Ghost Grateful Damashii, having chosen not to rely on Mugen Damashii's power alone while facing the Gammaizers. Viewing themselves as now obsolete, the heroic ghosts would enter a brief period of unresponsiveness before soon enough returning to Takeru's side, as he asserted his faith in them, against Gyro. Resurrection! Hero's Soul!

Attacked by Dark Necrom Red and Dark Ghost, Ghost was robbed of his Eyecons which were taken as part of Argos' machination. When Takeru and his friends followed them to the Island of Eyecons, Goemon was found to be living in harmony as one of 100 reincarnated historical figure within the Village of Heroes. When Argos' Gamma forces attacked the village, Goemon was one of only four survivors who were protected by Takeru, Akari and Onari. However, while an escape from Dark Necrom Blue was covered by Kamen Rider Ex-Aid, Dark Ghost eventually caught up and Goemon was struck down and reduced back to an Eyecon which was recovered along with the others by Argos. Gathering all 100 heroic Eyecons, Argos used them as a sacrifice along with Darwin's power of evolution to convert Takeru's dead body into a vessel for the ultimate Eyecon, the Extremer Driver, which he intended to use to fulfill his ultimate agenda of converting all life on both Earth and the Gamma World into ghosts. Ultimately, however, Takeru was able to gain the strength of the 100 heroes along with his friend's spirits, allowing him to defeat Argos seemingly at the cost of his own existence only for the 100 heroes to use their power to restore his soul with the original fifteen heroes returning to his side as he came back to Earth. Kamen Rider Ghost the Movie: The 100 Eyecons and Ghost's Fateful Moment

When Ghost faced the Hatena Bugster, Goemon was brought forth among all fifteen heroic spirits with the Eyecon Driver G only for the Bugster to repel even the God Omega Drive; Takeru would ultimately resort to a new power. Kamen Rider Heisei Generations: Dr. Pac-Man vs. Ex-Aid & Ghost with Legend Rider

During the battle against Kasshine and Decade Wizard, Goemon, backed up by Billy the Kid, was summoned by Kamen Rider Zi-O DecadeArmor Ghost Form to recover the replacement Ziku-Driver provided by Woz from the Time Jacker Uhr, allowing Geiz to transform having given his first Ziku-Driver to Zi-O after his was destroyed. Forever King 2018

Ishikawa Goemon was among the historical figures featured in the Genm Corp. game WayoseTUNE. We're Me!?

Goemon is among the historical figures who are featured in Stories of the World's Greatest People, the book passed down to Takeru Tenkuji by Ryu Tenkuji. He is acknowledged under The Great Thief of the Nation: Ishikawa Goemon (天下の大どろぼう 石川五右衛門, Tenka no Ō-dorobō: Ishikawa Goemon).[2]

Goemon's entry was ultimately left unseen on-screen, but was among those unveiled by Televi-kun Magazine. 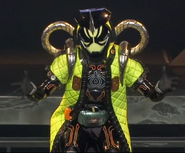 Onari as Ghost Goemon Damashii
Add a photo to this gallery

Necrom Goemon Damashii
Add a photo to this gallery

Goemon Damashii was released as part of the Ghost Change set GC-08 alongside Ryoma Damashii.

Goemon Ghost
Add a photo to this gallery

Omega Drive (Ore Goemon)
Add a photo to this gallery

Retrieved from "https://kamenrider.fandom.com/wiki/Goemon_Damashii?oldid=581655"
Community content is available under CC-BY-SA unless otherwise noted.